"Hunting" is certainly a good word to describe the pursuit of yummy mushrooms in the deep dark woods. It is a simple and fun activity, and the results are rewarding and tasty indeed. Below I show examples of five gourmet wild mushrooms that we have found in southeast Wisconsin: Hen of the Woods, Chicken of the Woods, Morels, Chanterelles, and Aspen Oyster Mushrooms; below those are some other mushrooms that I identified, but that I don't eat. All photo's taken by the Argo Builder.

Step-by-step instructions below; Step 2 is most important. 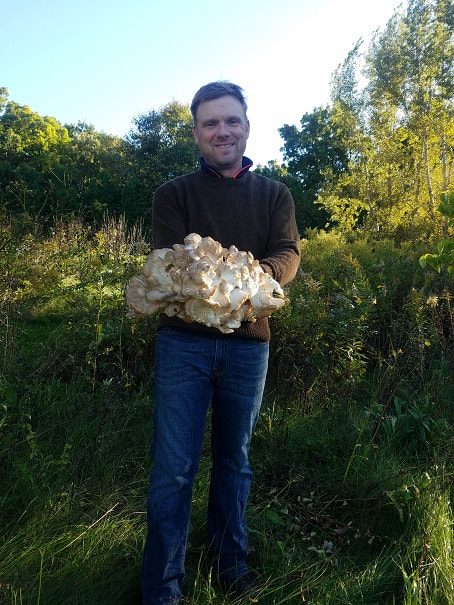 October 4, 2018: Found a lovely and fresh, recently grown Hen of the Woods today in Southeast Wisconsin. Interestingly, I also found one nice Chanterelle today (and I think it's a bit late for those).
Step 1: Research what it is you're looking for, and what season it emerges in, and what trees it grows near or on. We look for Hen of the Woods mushrooms that grow at the base of Oak trees or stumps in the fall. You will find them within a couple feet of the base of oak trees or right at the base of the tree. In spring we look for Morels that grow near dead Ash trees.  In late May and June we look for Aspen Oyster mushrooms, which grow on standing dead Aspen trees.  In summer we look for Chanterelles in a forest of living oak and hickory. Chanterelles don’t grow on dead wood, they grow from the ground. Chicken of the Woods can be found on the trunks and near the base of Oak trees in summer in this area.  More detail on these mushrooms may be found below.

​Step 2: Walk into the woods 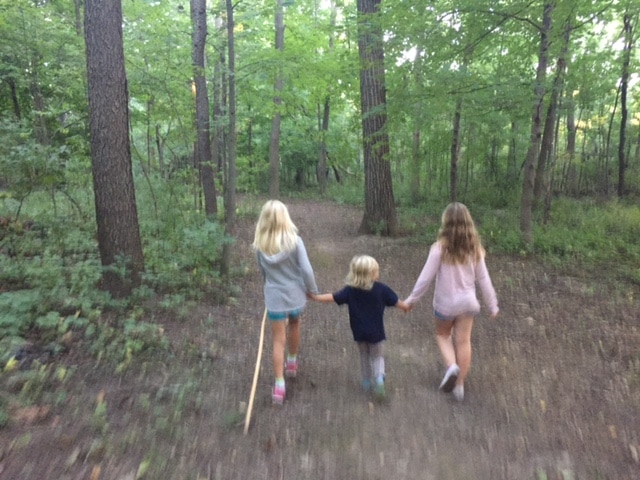 Step 3: Keep a keen eye and look for the right environment, and tree type, where your quarry may be hiding. Do not eat anything that you are not 100% certain is the mushroom you are looking for. Do not rely only on the photo's on this page for mushroom identification. If in doubt, don't risk it, there are deadly poisonous mushrooms. That said, be not afraid! Just be informed. Get a mushroom identification guide. I used the following sites for identification information:
http://www.michiganmorels.com/morels2.shtml

Hen of the Woods, also known as Maitake:

Hen of the Woods mushrooms grow here in Wisconsin in Autumn. They grow on or near the base of Oak trees or stumps when the air temp is around 50-60degrees. We have found them in September and October in Wisconsin. They are a large mushroom as can be seen in the photos below. Even the little ones are fairly large. The best advice I can give is to look all the way around the trunk of the Oak......Many times I have looked at a trunk and seen nothing, and then thought “well I’ll peek on the other side” and voila there’s one hiding!.....you can only see half of the trunk at a time. A Hen of the Woods is one mushroom that has many broad petals or fronds (my description and terms) that I pull apart by hand back in the kitchen. After brushing the petals off with a paint brush you can cook em up and enjoy. 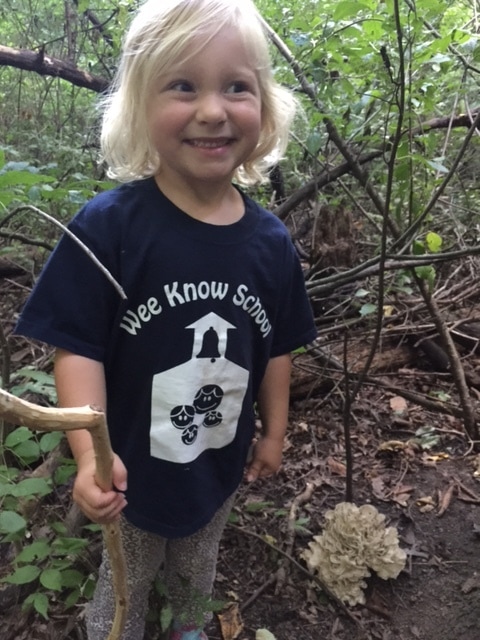 A fine little Hen of the Woods! 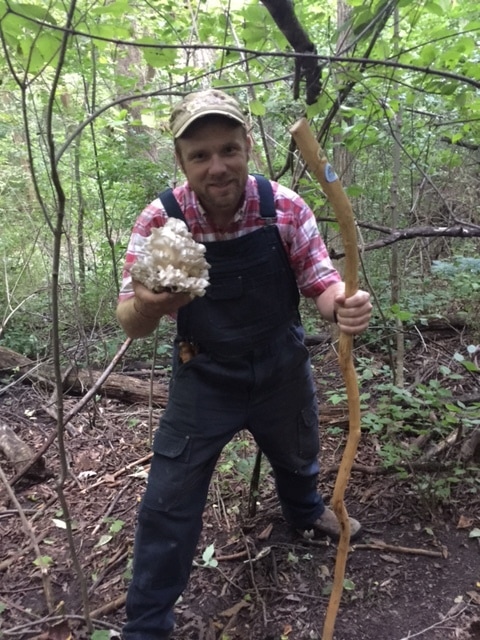 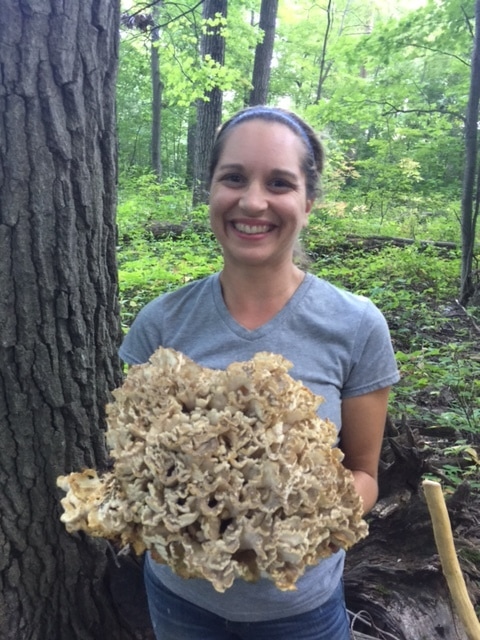 What a beauty! A good size Hen of the Woods found in southeast Wisconsin at the foot of an old Oak. The mushrooms grow in northern Japan and in North America, and maybe elsewhere, I don't know. In Japan, they are called "Maitake", which I am told means "dancing mushroom" on account of the happy emotion that causes one to dance upon finding one. 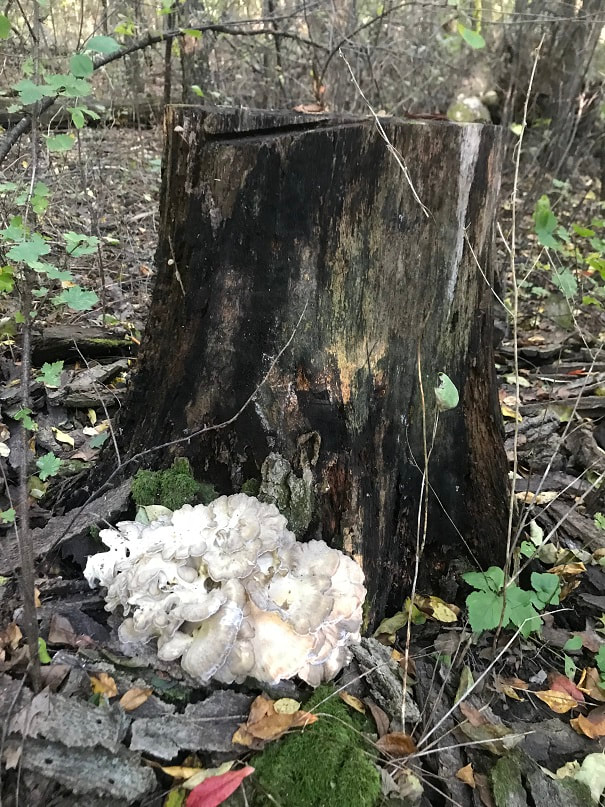 Example of a Hen of the Woods growing on a Oak stump. 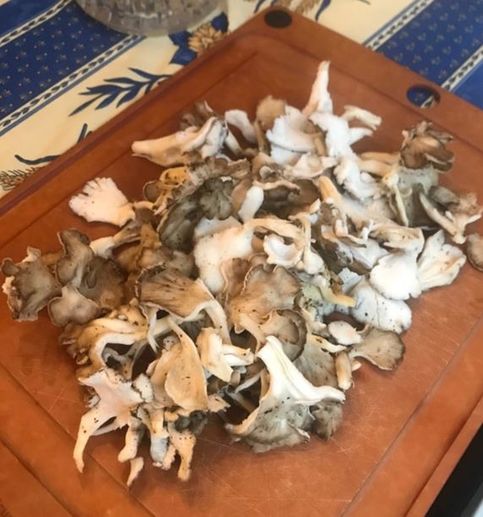 Hen of the Woods, separated into individual fronds by hand, and brushed clean.

Morels are one of the more sought-after wild mushrooms in Wisconsin. They emerge in spring here, and may be found at the wood edge or in the woods, growing from the ground; they like to grow around dead ash trees. Well drained soils or sandy soils where the woods meet a stream are a good place to look. They may also be found around Elm , poplar, or apple trees, and I have found them where none of those trees can be found nearby. The first Morels of spring are typically found on warm sunny southern facing slopes, and spread from there as the season goes on. I have read that they start grow when the ground temperature is 55deg and stop growing when the ground temperature reaches 62deg, but have not verified that myself. In Wisconsin that puts Morel season generally in late March through May , depending on the year and where in Wisconsin you are looking. 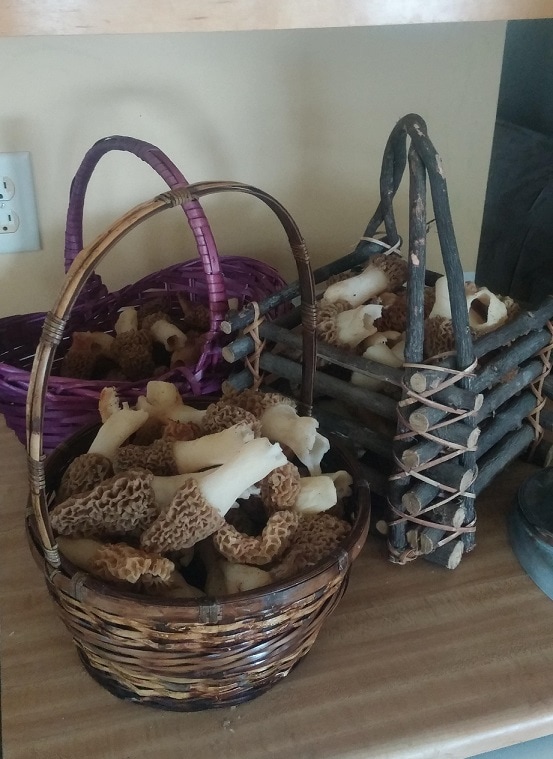 A bumper-crop of Wisconsin Morels picked in Spring; nice work Justin and Danika!

Chanterelles grow in Wisconsin in hardwood forests, in summer and early fall. They grow from the ground, not from dead wood. the ones I find are orangish, and 2 to 3.5" across on the top. Underneath, they have firm ridges that run along the underside and then the ridges split off into multiple ridges towards the outer edge of the underside of the cap. They do not have thin fragile "gills" that break when you run your finger across them. The video below shows an imposter mushroom followed by a chanterelle......my apologies for tearing the chanterelle from the ground rather than cutting it, I wanted to show the difference in the two mushrooms and forgot my knife. I did not harvest any by pulling them up...which is considered poor form. 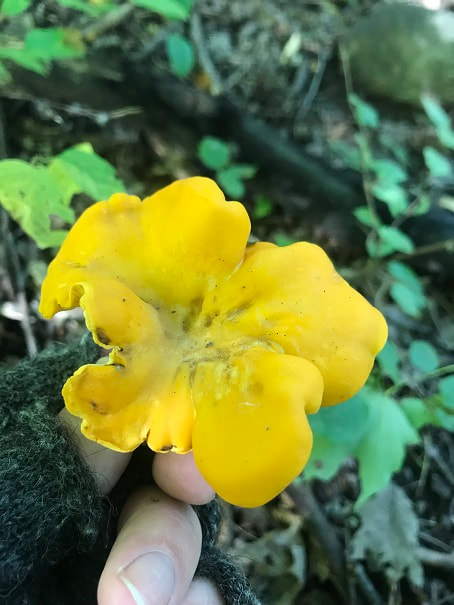 A Wisconsin Chanterelle. This was a young and fresh specimen that grew very shortly before I found it. 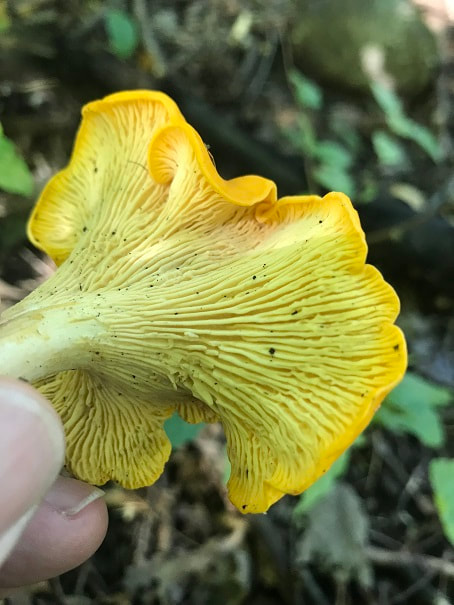 Underside of a Wisconsin Chanterelle. 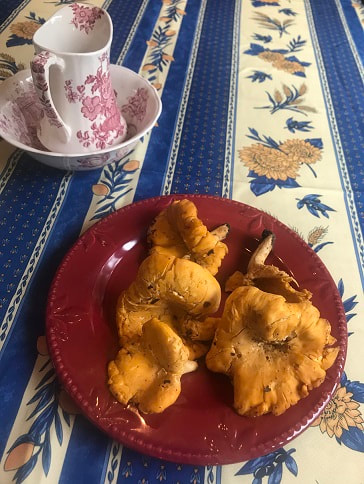 Wisconsin Chanterelles found in a stand of oak and hickory in Waukesha County, early September 2018. These were near the end of their edible life in my opinion, but they were still very yummy.
The Jack o Lantern mushroom is poisonous and looks similar to the Chanterelle.  Here is a good video on the differences: https://www.youtube.com/watch?v=9aOwgaIFKMY​

Aspen Oyster Mushrooms are easy to spot, as they are bright white.  They grow on dead Aspen trees that are still standing.  Here in Wisconsin they emerge in late May.  They may be found high up on the tree, as shown in the picture below.  They may also be found lower down where they are easier to harvest.  They taste great sauteed with garlic, green onion, salt and pepper. 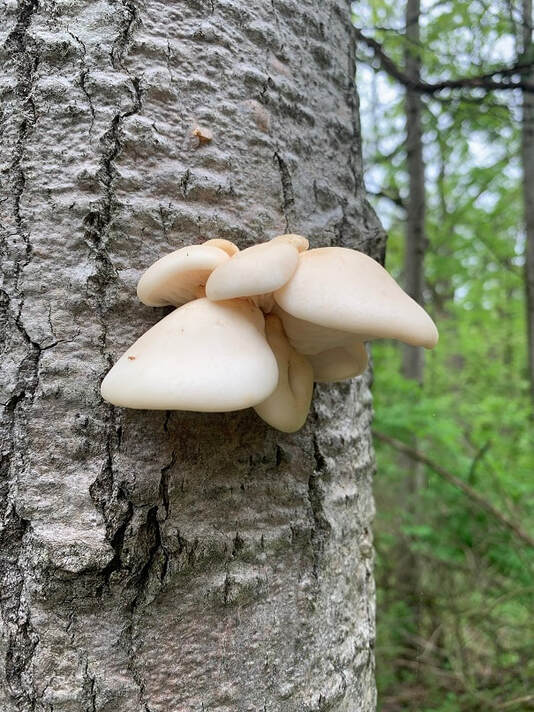 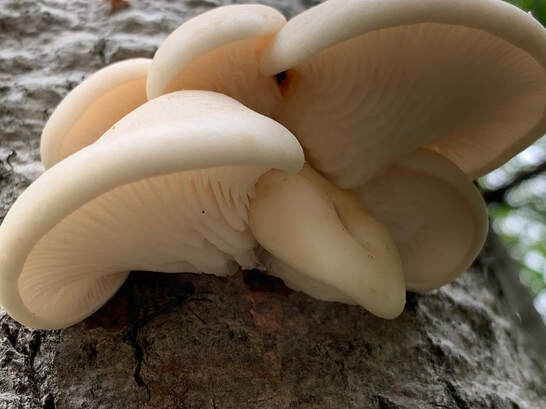 Gills and underside of the Aspen Oyster Mushroom 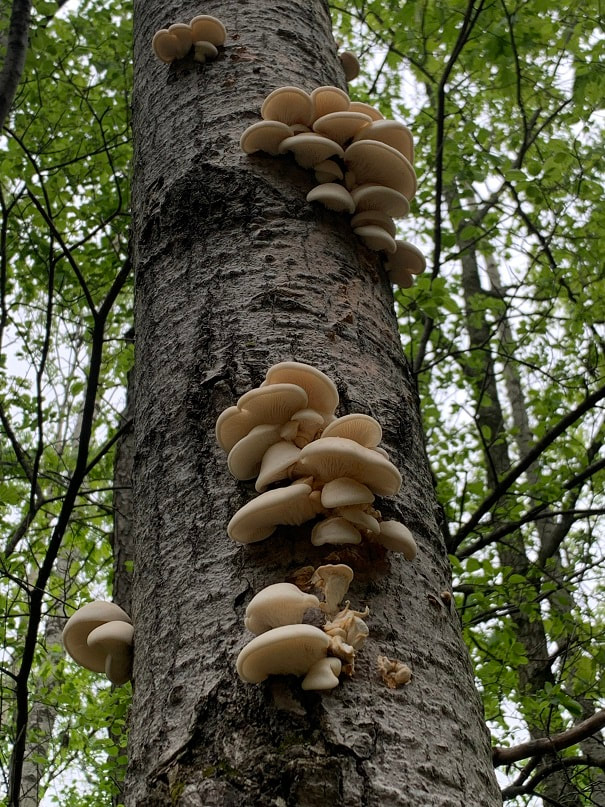 Many clusters of Aspen Oyster Mushrooms may often be found on one dead Aspen tree. 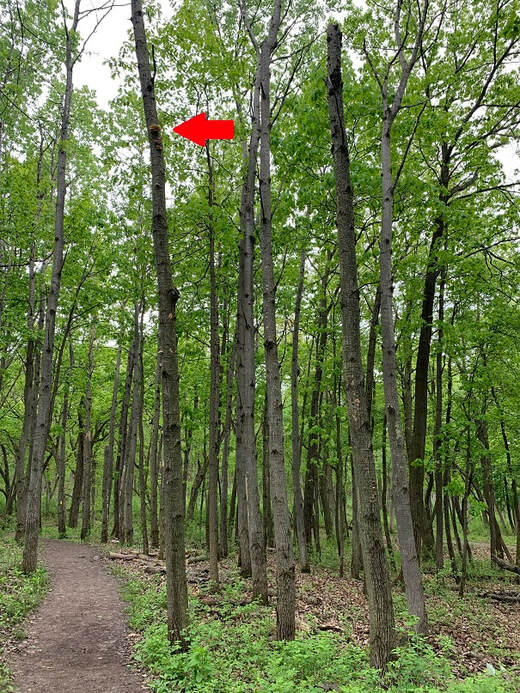 Example of a cluster of Aspen Oyster Mushroom high up on a dead Aspen tree. It would take an inventive hunter, or a brave climber, to harvest those.

Chicken of the Woods

This is a large bright orange mushroom with many large petals (I know they're not technically called petals...).  The edge of the mushroom is lighter, almost white or yellowish.  The one in the photo is about 2 feet in diameter.  This mushroom is very tasty and meaty; you could almost think it's chicken; hence the name!  There are two different varieties:  one is white on the underside of the mushroom petals ( L. Cincinnatus is the "white pored" chicken of the woods), and the "Sulfur Shelf" Chicken of the Woods (L Sulphureus, which is yellow on the underside of the petals). 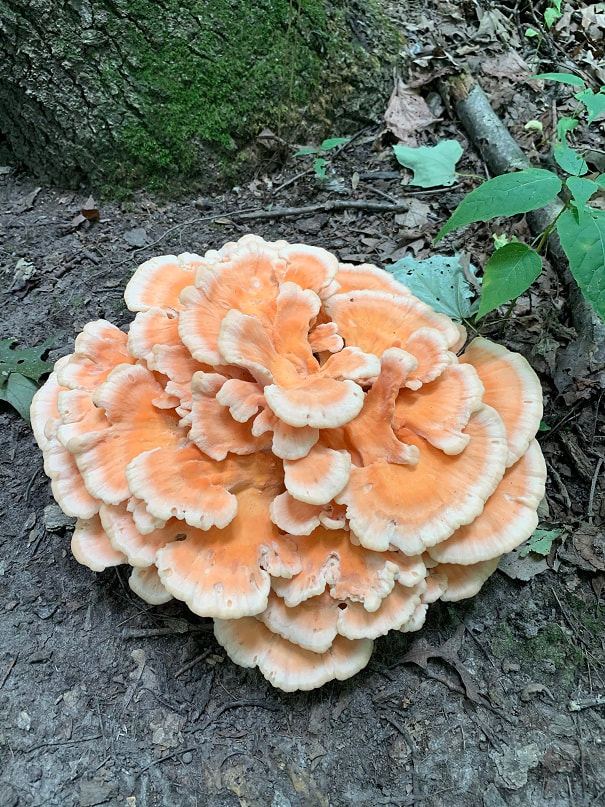 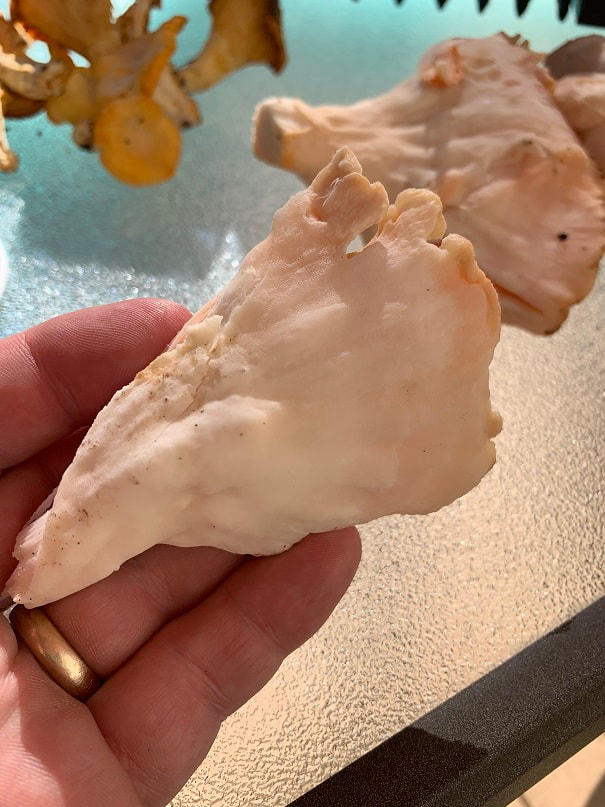 Other Wisconsin Mushrooms....that I don't eat:

Safety note:  I am not an expert, I am a hobbyist.  Do not eat any mushroom that you are not 100% sure you have identified correctly and 100% sure is safe to eat.  Use any photos or information on this site at your own risk.  If you find a misidentified mushroom on this site, please email Jason@argobuilder.com

A pretty, perennial, shelf mushroom.  Do not eat them. 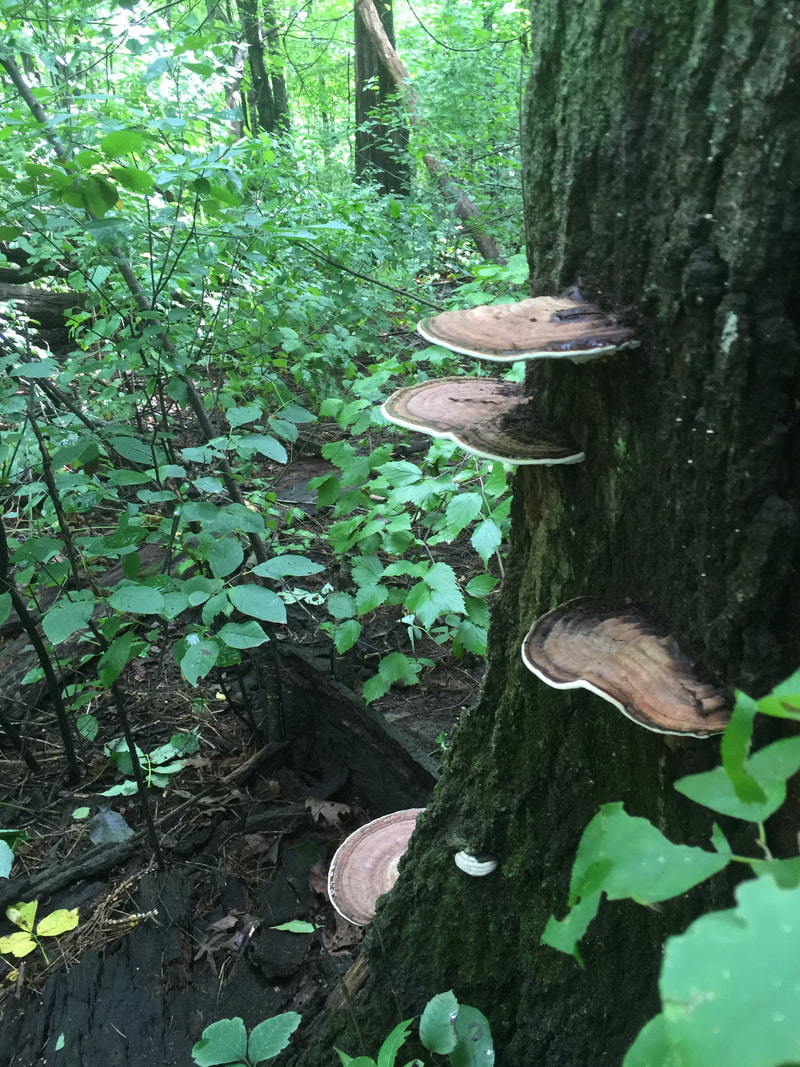 Artist's Conk mushroom on an old dead tree in Wisconsin. 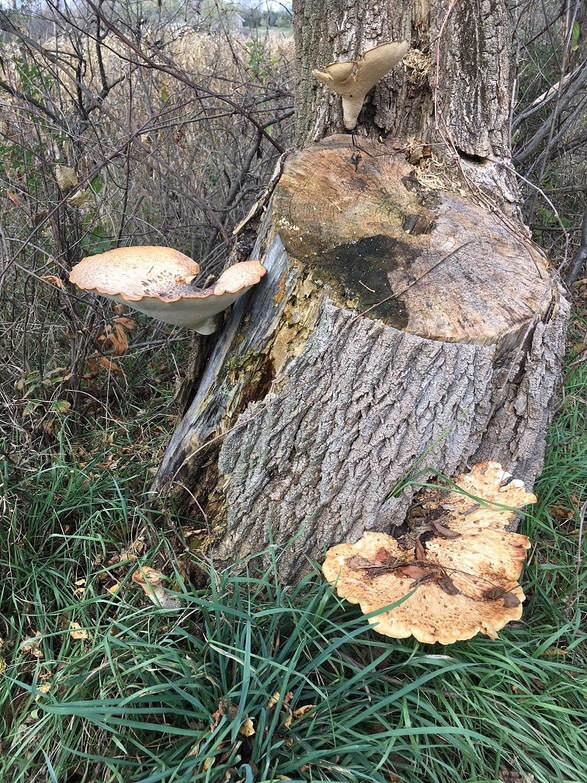 Pheasant's Back mushrooms growing on a roadside tree in Wisconsin, mid-October. 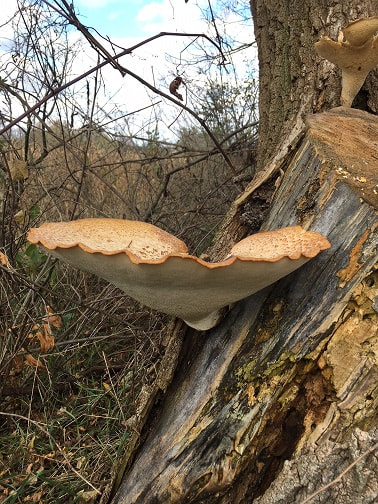 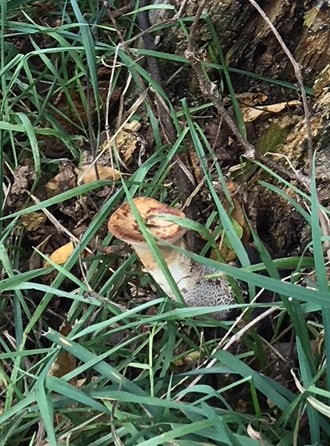 A young Pheasant's Back mushroom, before the cap has grown into a large shelf. I have read that the young ones are used in various recipes, but I have chosen not to eat these.

Old Man of the Woods 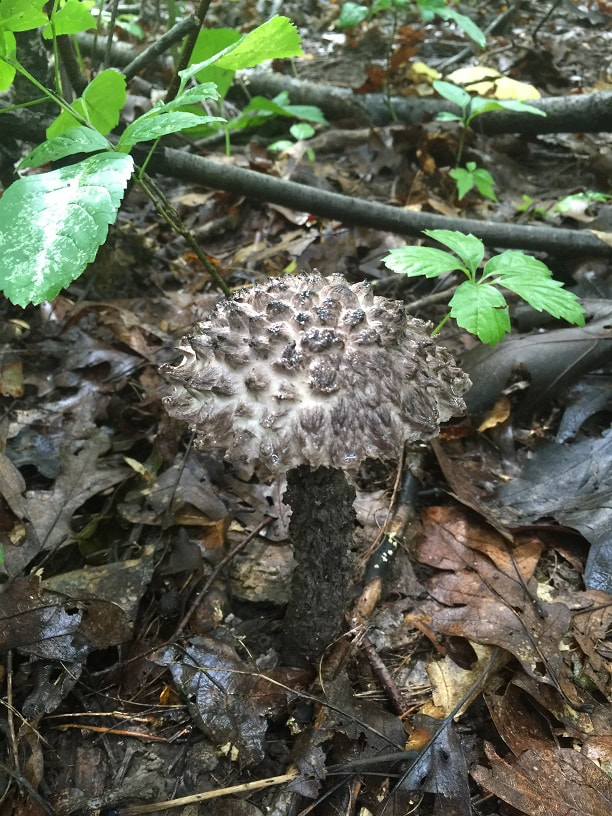 Old Man of the Woods Mushroom in Wisconsin. I have read they are edible, but I don't eat them. This guy was all by himself and looked content, so I left him there. Found in September in a mixed Oak and Hickory forest. 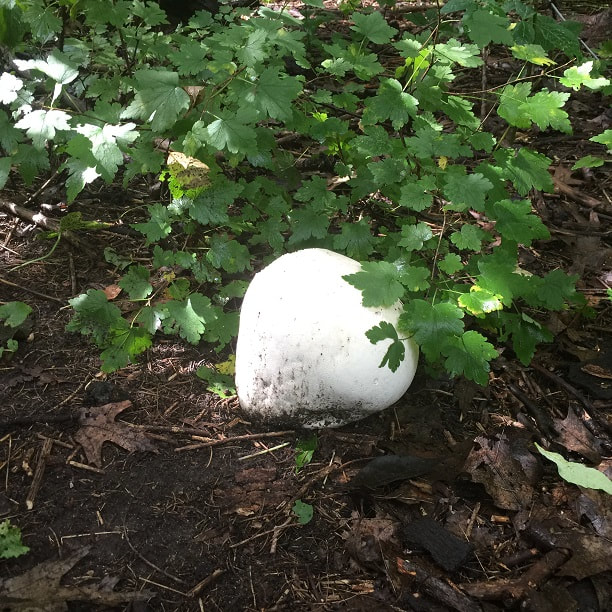 These bright white basketball size shrooms are easy to spot in late summer early fall. I don't eat them.

Pretty , red-capped mushroom, cap and stalk are white on the inside as seen in the second photo below.  Photo is from fall in a mixed Oak and Hickory forest. 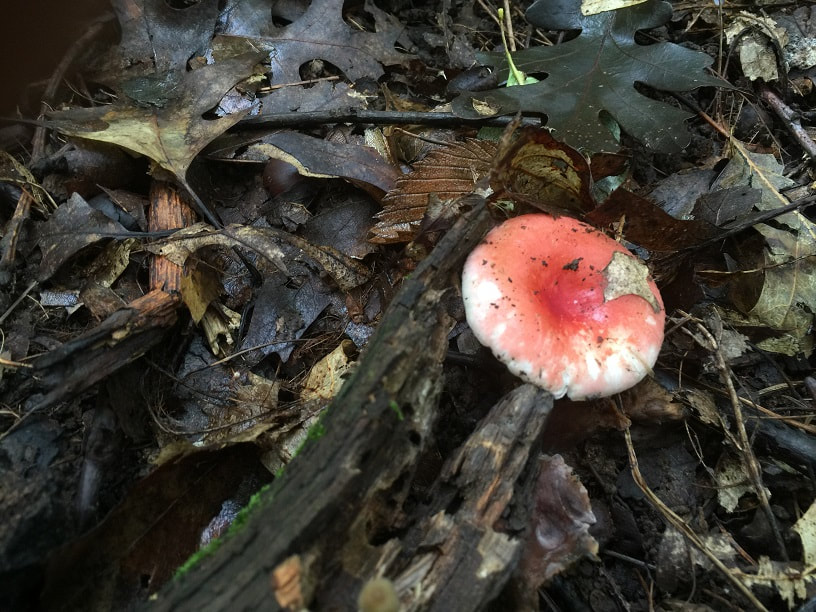 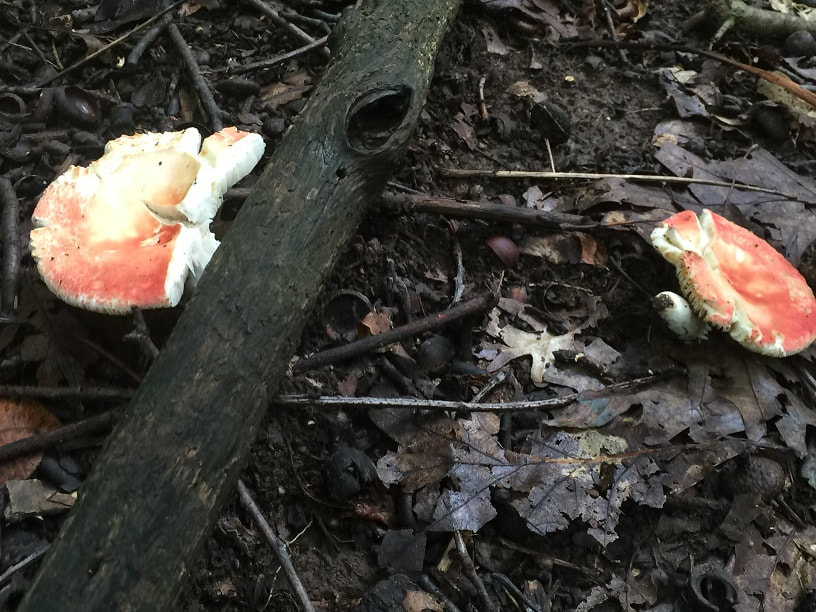 White mushroom that grows from tree trunks, often high up the trunk, from a wound or old hole where a branch used to come out of the trunk.  Grows most often on Elm and Box Elder trees.  I took this picture during the 2nd week of November here in Wisconsin.  The mushroom grows in surprisingly cold conditions, for example there have already been many freezing conditions here over the last month. 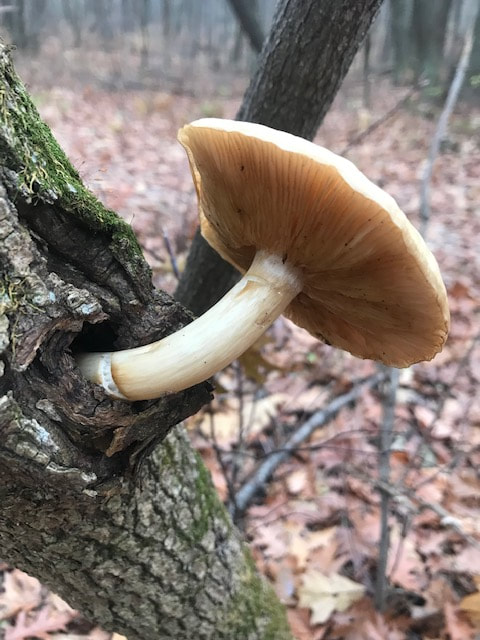 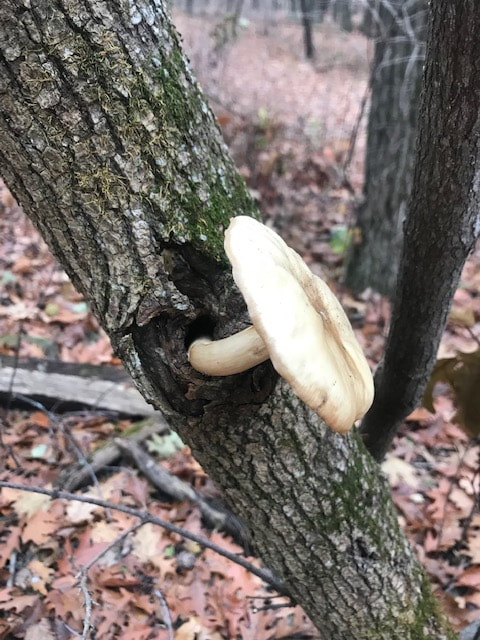 Emerges and spring and hangs around into summer.  I don't eat these.  The ones in the picture are about 3" across. 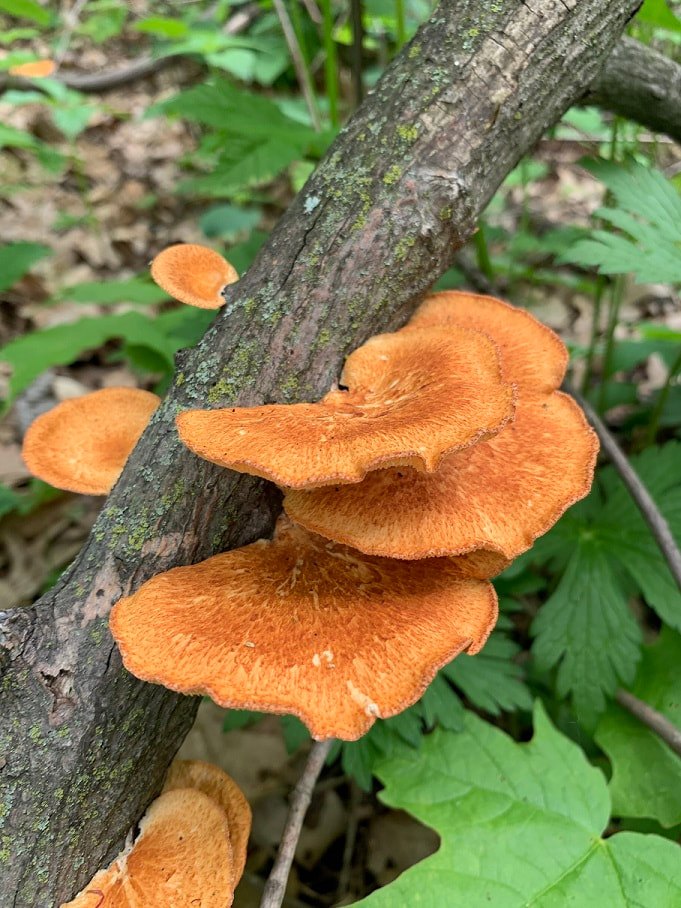