Sailing from Door Country Wisconsin to the Upper Peninsula of Michigan, and Back.

This summer, my brother and I again went on a sailing adventure in my Compac 16 "Lillyanna" in the waters of Lake Michigan and Green Bay.  3 nights 4 days sailing from the tip of Wisconsin to the upper peninsula of Michigan and back.  We departed from Jackson Harbor, which is a northern remote harbor that is beautiful in it's simplicity and scenery, and which is wonderfully protected from all points of wind, and which must be greatly respected due to the rocky shoals at its entrance and shallow interior depths.  The weather and water was beautiful but brisk throughout this mid august trip, and the waters were empty of other boats and clear and cold. 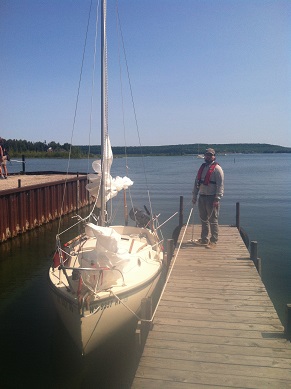 We were well provisioned with coffee, salt cod, chili, onions, carrots, pickled herring, oatmeal, beef jerky and such.  Lillyanna has oars, storm jib, tether attachment points in the cockpit and foredeck, sealed&hinged lazerette hatch, lifelines, bow-mounted 11lb bruce anchor with chain, backup Danforth on 200' anchor rope, 4hp motor, 2 spare fuel tanks, CB, all coastguard required safety items, bell, manual and electric bilge pumps, jib downhaul and halyard routed to cockpit, bunches of spare hardware and lines, and every other safety item I could think of.....but please know that we picked our weather window carefully and did not force an itinerary over safety.  Respect the waters as these are choppy seas, 5 to 20kt winds typical, wind changes throughout the day, and the water was 50-62degF at the surface depending on our location over the last 4 days.  That said, these are ABSOLUTELY BEAUTIFUL waters and we went days in the middle of summer, through crystal clear waters and islands without seeing another sail. Listed from south to north the main peninsula's and islands are:  Door County Peninsula, Washington Island, Rock Island, then in Michigan: St. Martin Island, Poverty Island, Big and Little Summer Islands, Garden Peninsula Michigan. 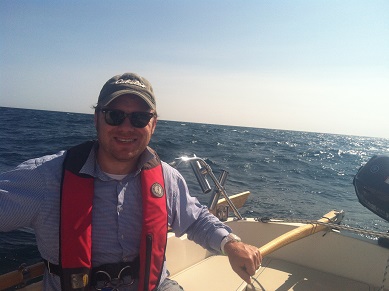 We hoisted full sail and 110 jib at the dock and sailed from Jackson Harbor , north and west between Washington Island and Rock Island.  Be very careful of rock ledges and shoals on the south and east entrance of Jackson Harbor; stay between the red and green markers.  Check your charts to understand the shallow water between Rock and Washington Island, DO NOT ATTEMPT TO SAIL east to west or west to east THROUGH THE CHANNEL BETWEEN ROCK AND WASHINGTON ISLANDS, the water is too shallow.  To pass east or west into Green Bay to the main body of Lake Michigan you must pass somehwere north of Rock Island, or south of Washington Island (through Portes des Mortes passage).  The wind in the water between Rock and Washington Island was weak but when we cleared the islands we caught a nice south wind and sailed before the wind to the east of St. Martin Island (passing east of both bouy 1 and 2 on St Martin Shoal).  At bouy 2 the wind picked up and we reefed the main and hanked on the storm jib.  We sailed north past St.Martin Island, past rocky Poverty Island and it's abandoned lighthouse, and all the way to Summer Island, Michigan.  We entered the bay of Summer Harbor, on Summer island as the wind rotated clockwise from south to the west, and we anchored in Summer Harbor.  PLEASE NOTE, that in both this harbor and the next that we anchored in, the bottom was level, flat, slippery, limestone shelf, with NO anchor holding ability.  Luckily I have a small boat with a large anchor and we picked this harbor as it was sheltered from the wind.  We hooked the 11lb bruce on a 18" diameter roundish boulder that was sitting on top of the flat limestone (there are a few such rocks we saw in the harbor), and it held, and we threw out the Danforth also, which was pointless on the flat rock bottom.   One can drag an anchor across that slippery flat limestone bottom by pulling lightly on the anchor rope between forefinger and thumb; that's how pointless it is to drop an anchor on that surface.  I cannot verify it, but I would estimate there to be good helpful resources available from Fairport Michigan which is located between the mainland and Summer Island, we noticed recreational fisherman in the area.

Switching to the the storm-jib: 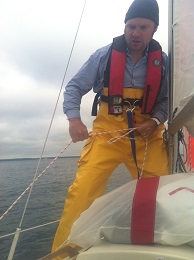 We spent the first night in Summer Harbor and some storms passed over us, we cooked breakfast on my two-burner stove (all cooking done in the cockpit not in the cabin) and then it rained hard until about 8am.  When it cleared, the wind was from the west and we made a run across the passage, and sailed to Garden Peninsula, of the upper peninsula of Michigan.   We found an un-named large bay , opening to the south/east just north of Point Detour, which we named La Baie du Fleurs on account of all the wonderful varieties of wildflowers growing on the shores.  "Portage Bay" was north of us.   A pair of bald eagles circled above and we saw one pluck a fish from the surface of the water in that bay.  Again, we met with a very difficult anchorage.  The wind was from the north, and we did not have time to sail to a different bay, but the nice bay we were in had a flat slick-rock bottom.  I find it tough to sleep if I am expecting to be blown out to sea, so we decided to swim an anchor to shore.  My brother swam a rope ashore three hundred feet and we got a laugh following his reaction to jumping into 50degF water.  He secured the Danforth well at the shoreline, and we set the bruce to the side of the ship for whatever security it could provide in case the wind shifted.  Read some books, played some cards, tried a melody on the tin whistle; no one around.  Hung the salt-cod overboard in a mesh-bag for about 45 minutes and then warmed it in the pot, draining and refreshing the water twice in attempt to "de-salt it"; it winds up being a memorable taste of a staple food of yesteryear;  we cooked it again two nights later.  Upper 40's that night, but the cabin of the Compac 16 is cozy. 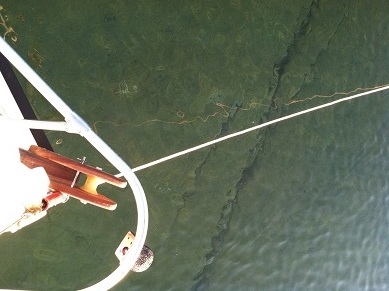 View of the sun rising over the clouds of Lake Michigan from the bay we anchored in: 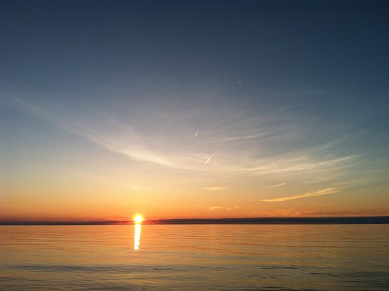 We spent our second night in this memorable bay, and we heard the howling of wolves, or of dogs that howl like wolves, the next morning.    This bay is about a 26 mile sail north of Jackson Harbor WI.  In the morning we had a north wind and we used it to run south to the bay on the south west corner of St. Martin Island.  We sailed south, past the east shore of Summer Island, and cut west between Summer and Poverty Island, then south to St. Martin.  Beautiful sailing, and again, the sea's were empty and clear and wonderful.  Cormorants, eagles, and white pelicans were the main birds in the area, in addition to various gulls.  We had a nice lunch in this bay, but there were "no trespassing" signs posted so we didn't go ashore.  The island was recently sold by a wealthy Milwaukee family, to a nature conservancy.  We sailed down to the west shore of Rock Island and anchored there.  It is a steep shoreline, but full of large boulders than an anchor will catch on (maybe too firmly as we had to deal with upon our efforts to weigh it!).  We swam ashore and toured the Potowatamie Lighthouse which is the oldest in Wisconsin and beautifully restored.  Rock Island is a worthwhile destination, and the lens, view, and architecture of the lighthouse is worth a visit.  Note that there is a point when sailing south from the UP that we could see Poverty, St.Martin, and Rock Island's lighthouses.  We cooked a fine meal on board and slept well as the winds continued, as they do, to shift around us. 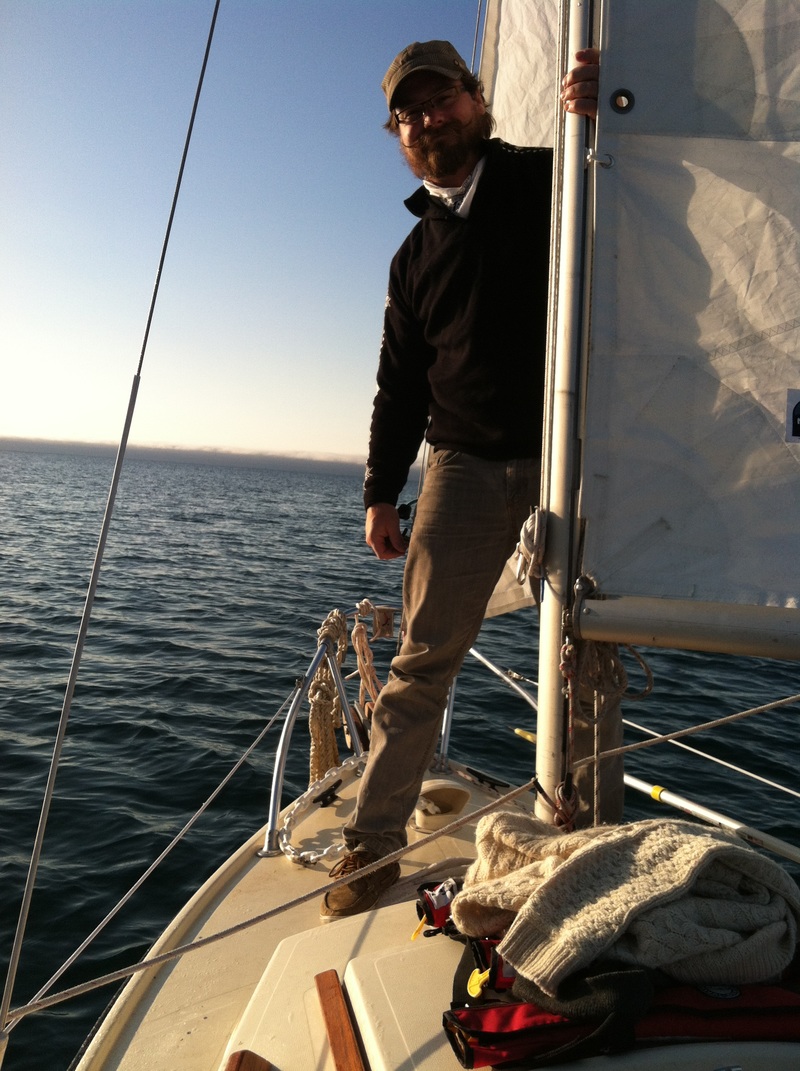 Justin before the mast 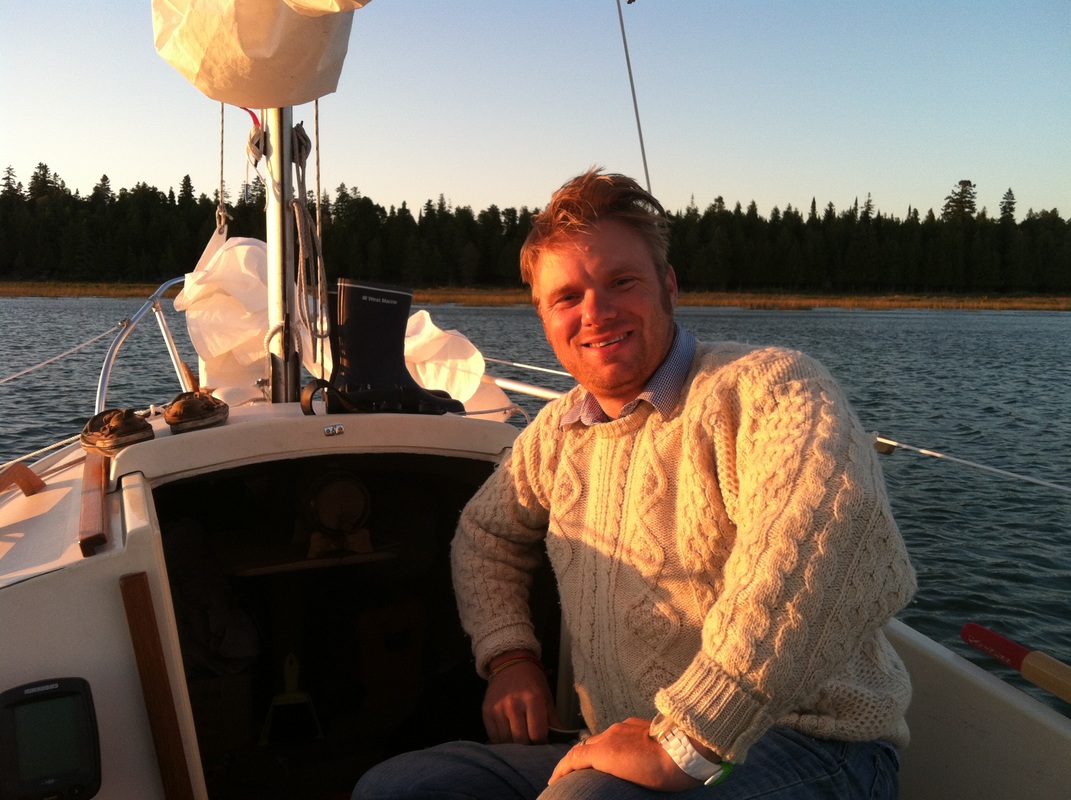 Our anchorage in la Baie des Fleurs. Picture by Justin. 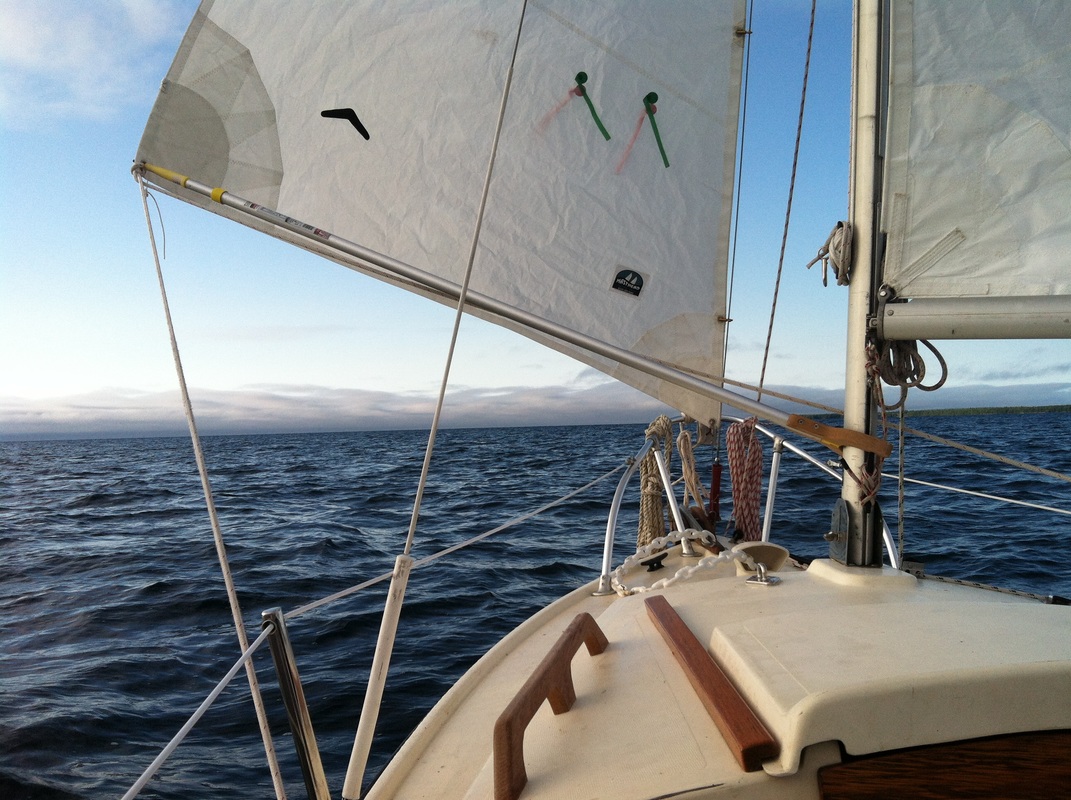 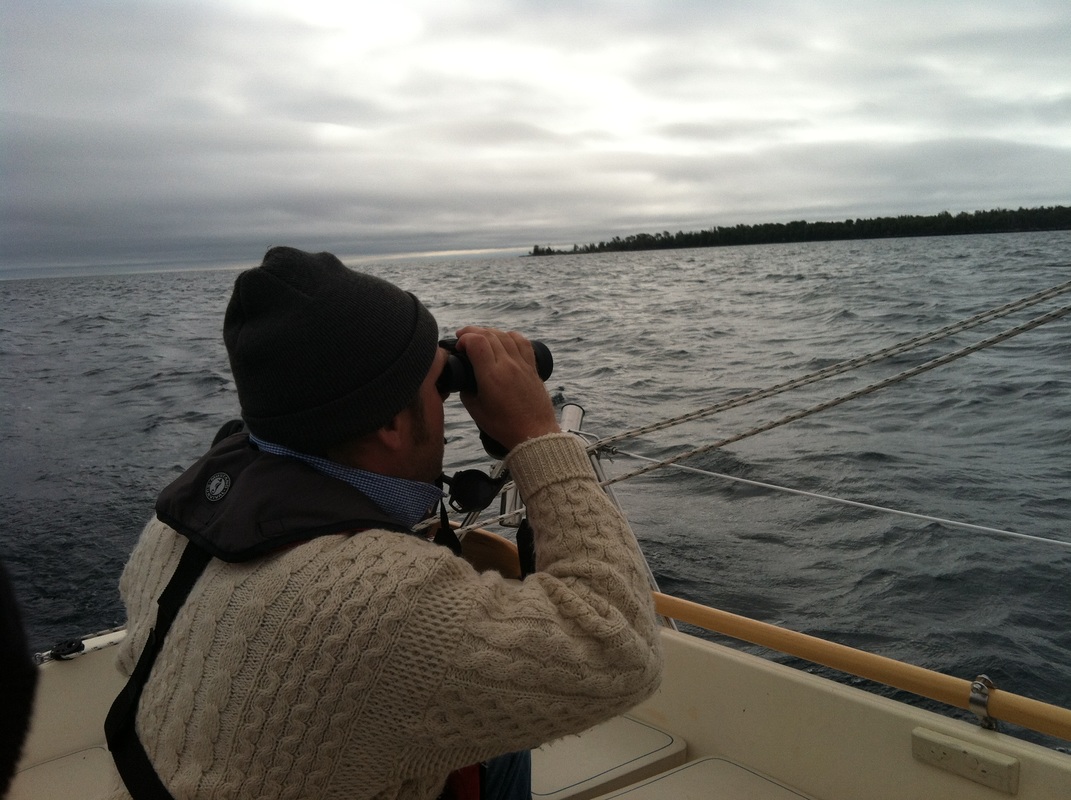 Observing Poverty Island, Michigan, as we sail south. Picture by Justin.
Life aboard the ship! My brother dealing cards, and our cooking setup:

Anchored off of Rock Island, WI 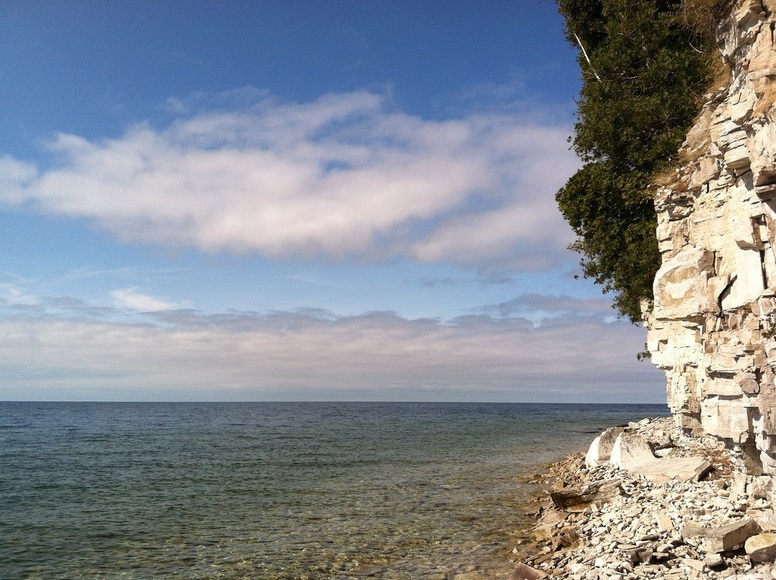 Rocky Bluff on Rock Island, WI
Rock Island Lighthouse Lens (Potowatamie Lighthouse, oldest in Wisconsin).  Great lighthouse tour.  The lighthouse is decommissioned and the current coast guard light is in the yard next to the old (perfectly restored) lighthouse.
In the morning , the wind was coming directly from Jackson Harbor, so we beat across the passage in an hour and sailed into the harbor.  It was too wavy for cooking at our anchorage, so we anchored in Jackson Harbor and cooked our breakfast.  Then we rowed to the dock and pulled out the boat.  No motor used to get us from start to finish; from a safety point of view this was not a goal of ours, but it's always fun if it can be done.  This was a great adventure for us, and as always, most importantly, was a wonderful time spent with my brother.
​ 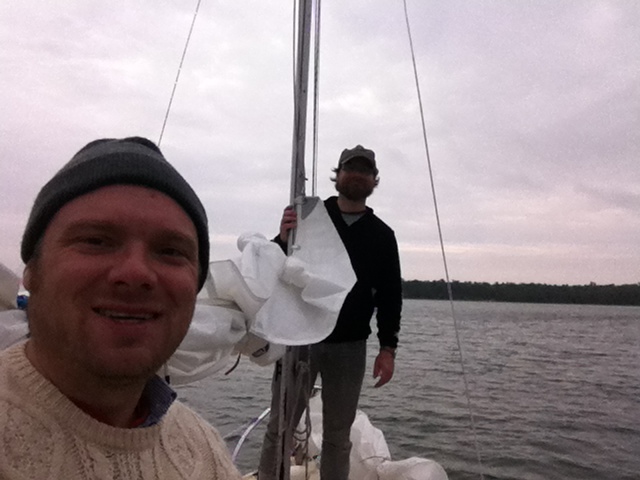 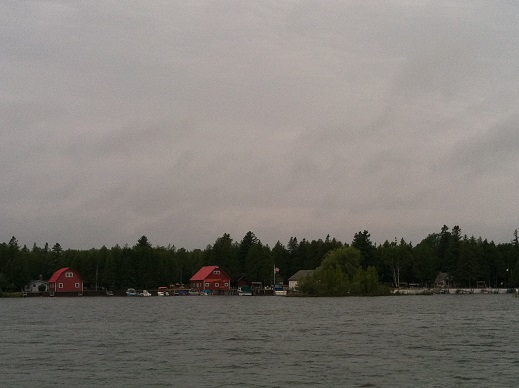