Returned last night from a very enjoyable 4 day sail with my brother in a 1981 Compac 16 around Northern Door County Wisconsin in Lake Michigan/Green Bay.  Arrived at Gill's Rock at 9am Friday, it was empty and the launch was closed so we drove south to Ellison Bay and launched from there (added some miles to our sailing trip as it was further south than we had expected to launch).  Launched at 10:30am.

We sailed out into Green Bay and met with a strong South Wind which had plenty of room up the bay to build good sized waves.  These were the highest following seas and largest waves that I had sailed in, and it was an adventure.  We were tethered in, with lifevests on, and manning the tiller was a constant job as the waves kept trying to turn the boat sideways.  We had great memories over the trip; the best ones were in the high sea's and those also were the times when we were holding on tight and concentrating and no one was willing to try to reach the camera!  So those moments will have to be memories, but we got nice photo's during the calmer moments. 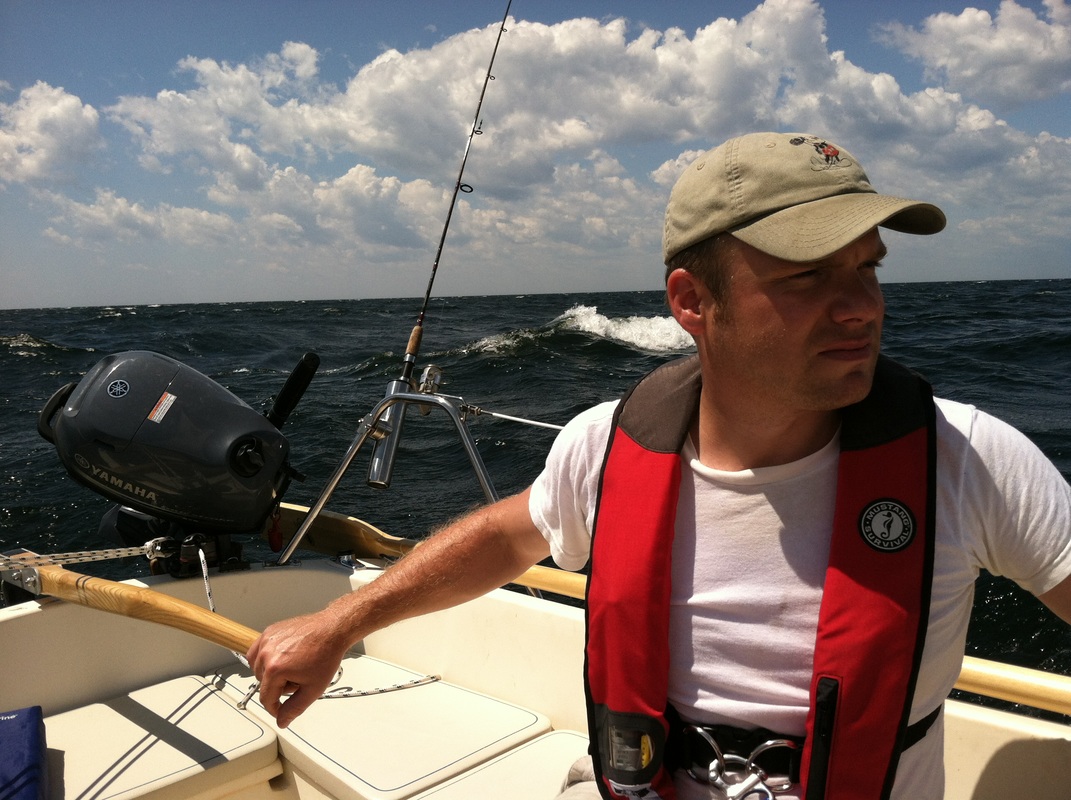 We made very good time up around Washington Island and rounded the point into Washington Harbor in early afternoon.  Washington Harbor had a beautiful round stone beach and we also snorkeled around the wreck of the Louisiana.  the Louisiana was a big ole steam ship that blew ashore after an explosion in a gale.  It is in shallow water in the southeast corner of the bay; it is an easily explored wreck.  Washington Harbor is a nice bay, but is fully open to the north, and as the afternoon wore on, the wind shifted to the north, and we wound up having a rolling night in the cabin sleeping.  I was worried we would catch a bit of mal de mer, but we slept great (and slept well the whole trip) in the cabin.  11lb claw anchor held well. ​ 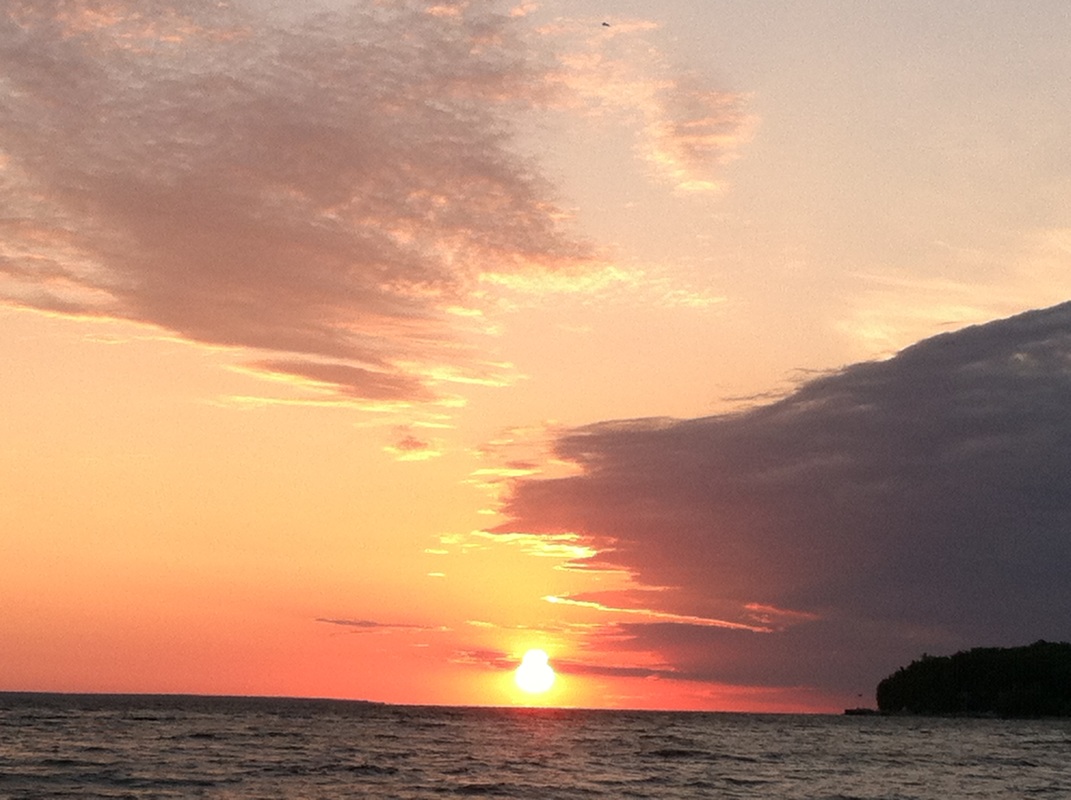 Woke up early and by the time we were ready to sail at around 6am the wind had quickly built to 16mph from the north!  It was blowing straight into the bay and built the biggest waves of the trip.  Sailing out of the bay was very exciting but we made it, and then had a bouncy broad reach east to Jackson Harbor.  We took consistent waves over the bow, and had one boarding wave come over us from the side and fall into the cockpit, great adventure.  I was impressed by how quickly the water drained out the scuppers.  Jackson Harbor is very quiet and picturesque, the entrance is very tricky and we needed to execute a jibe in waves and wind to make the turn into the narrow channel.  Be very cautious of the shoals east of the harbor channel, they are abrupt. Also, I would not recommend any attempt to sail through the passage between Rock island and Washington Island, it is about 6inches deep.  Had a nice breakfast in Jackson Harbor, and took a walk around the small fishing museum.

At the dock in Jackson harbor: 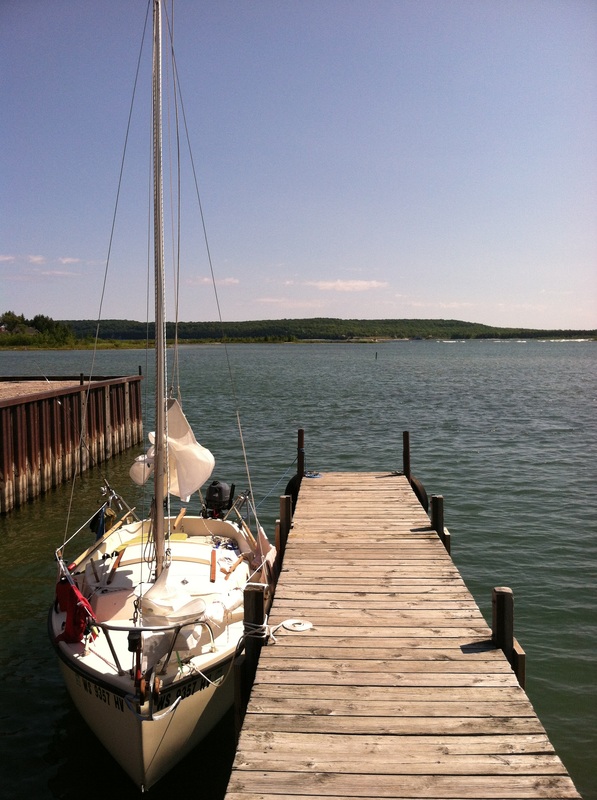 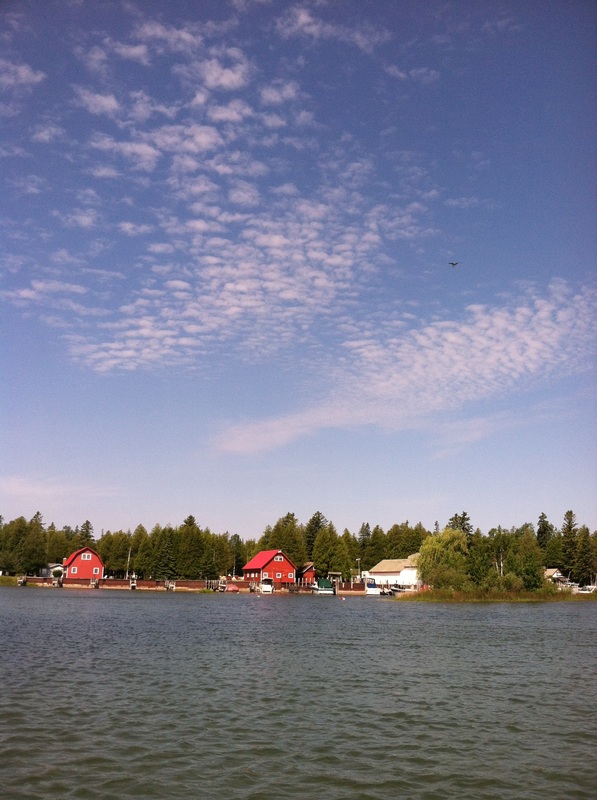 Jackson Harbor, Washington Island WI
Sailed over to Rock island, anchored, swam ashore, and explored the island, including the Viking Hall and old Potowatamie Lighthouse.  Sailed back, anchored, and overnighted in Jackson Harbor.  Well sheltered, good nights sleep.  It was in the 40's at night, but the bunk was cozy.  Propane stove served us well for the trip .

Sailed out from Jackson Harbor in the morning under nice north wind.  Rock Island with lighthouse: 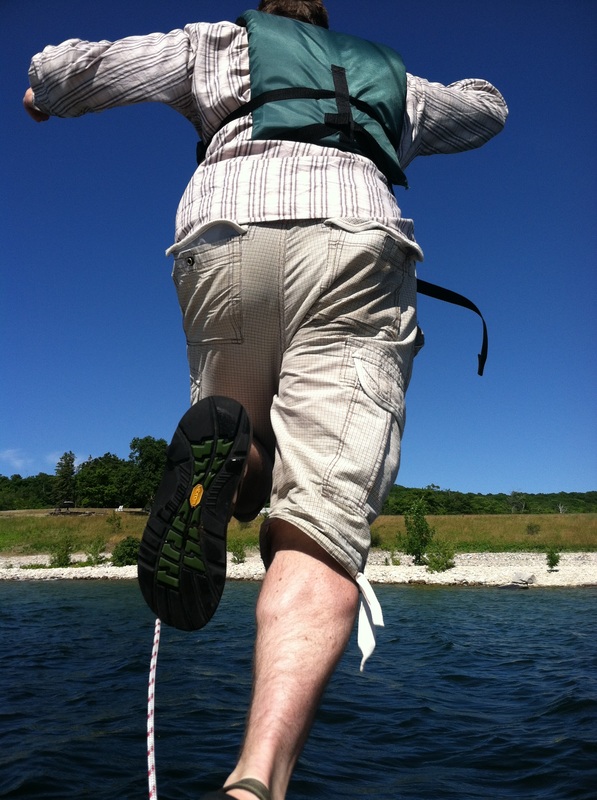 My brother, jumping into the water to swim ashore. The rope that he swam ashore with him can be seen in the photo. 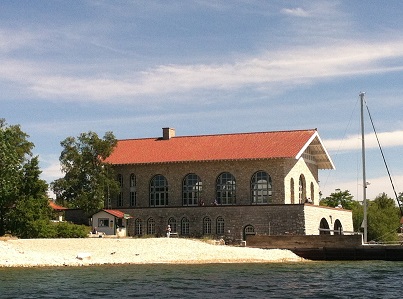 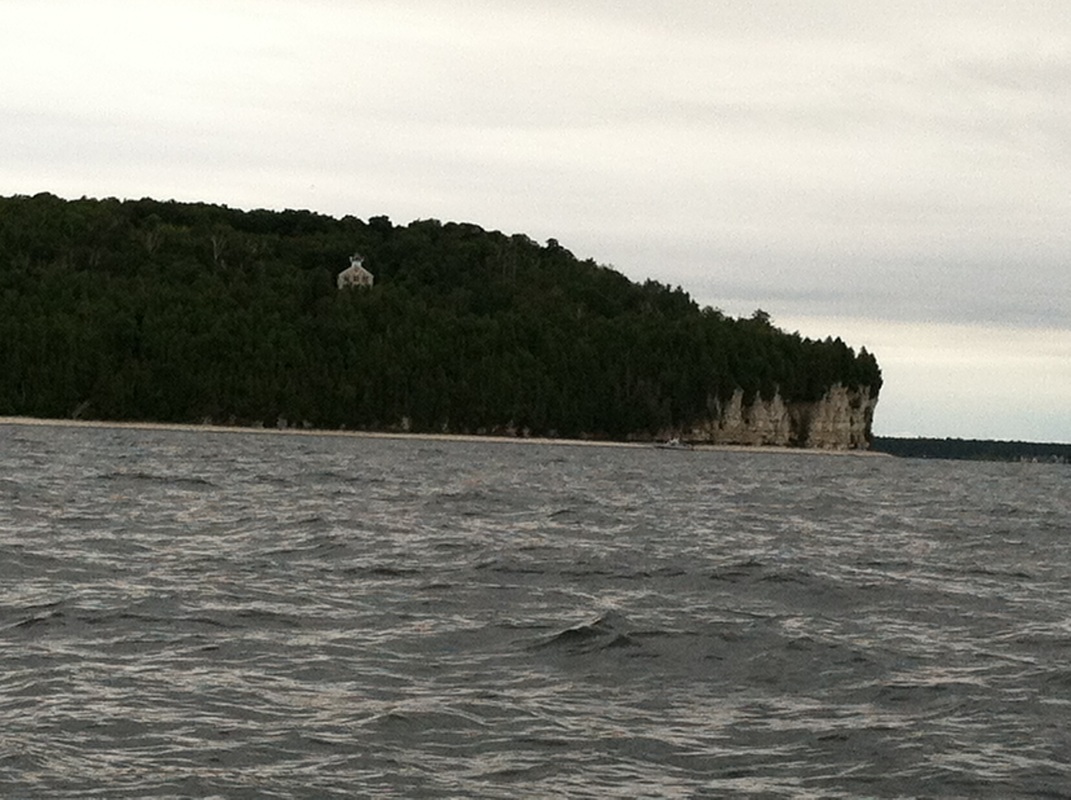 Have to keep a sharp eye, there are big ships out here!  We had the radar reflector up and always monitored ch16: 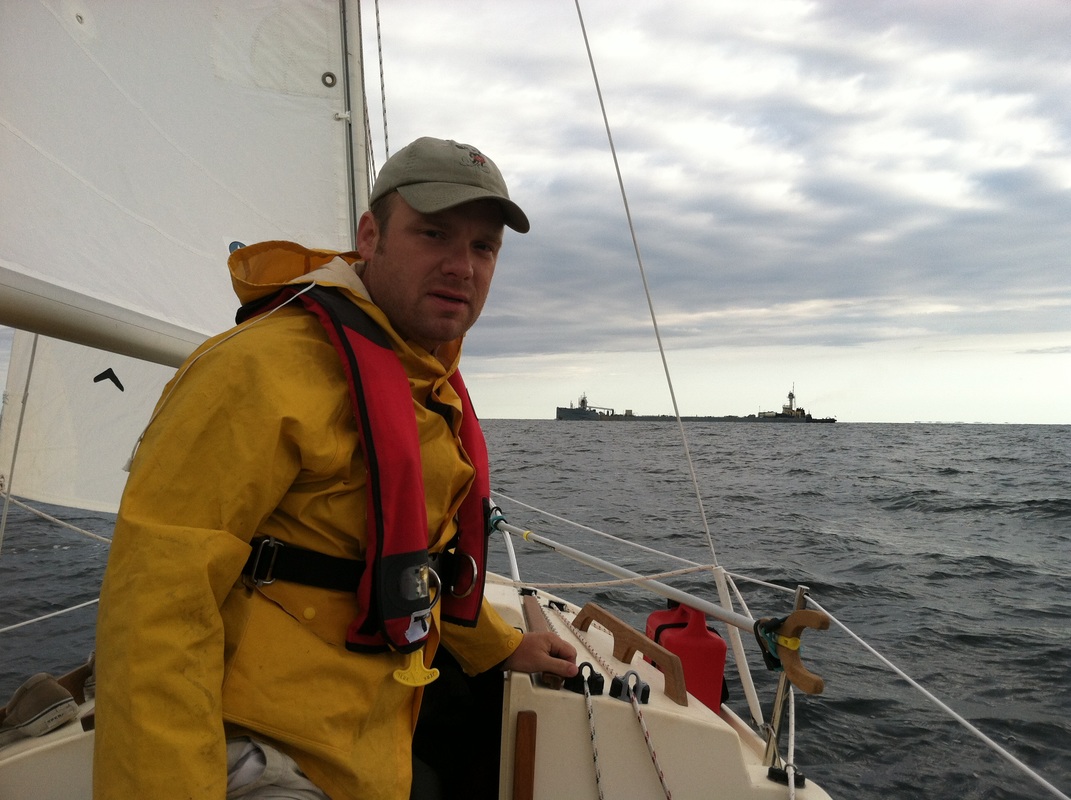 Then the wind suddenly died, but somehow the waves remained.  Being mostly an inland lake sailor, this was a new and challenging situation.  The waves were pushing us south, so, with +20miles to go that day, we begrudgingly fired up the motor and motored around the top of rock island.  Down the east shore of Rock and Washington Island we had mostly 0kt winds, with an occasional puff which we harnessed with a wing-on-wing sail arrangement. Also took up the oars and rowed.  Got bored and motored some more, over all motored 5 miles of about 20miles that day.

Wind gauge, becalmed on the east side of Washington Island: 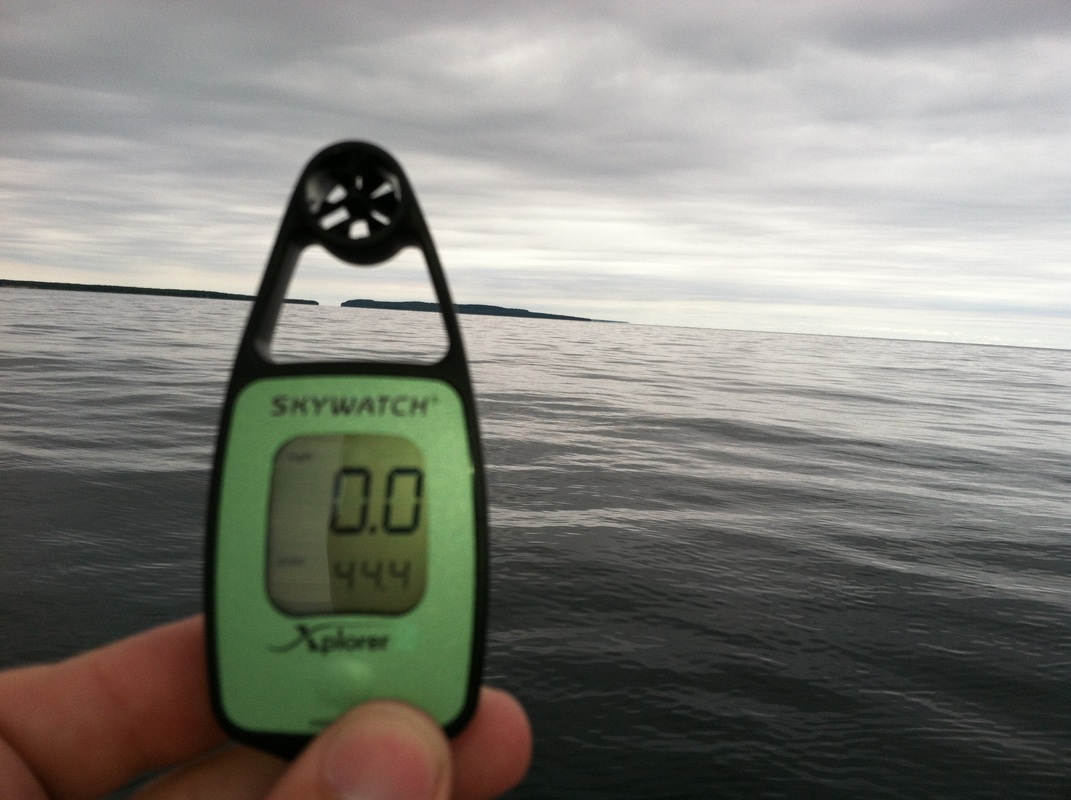 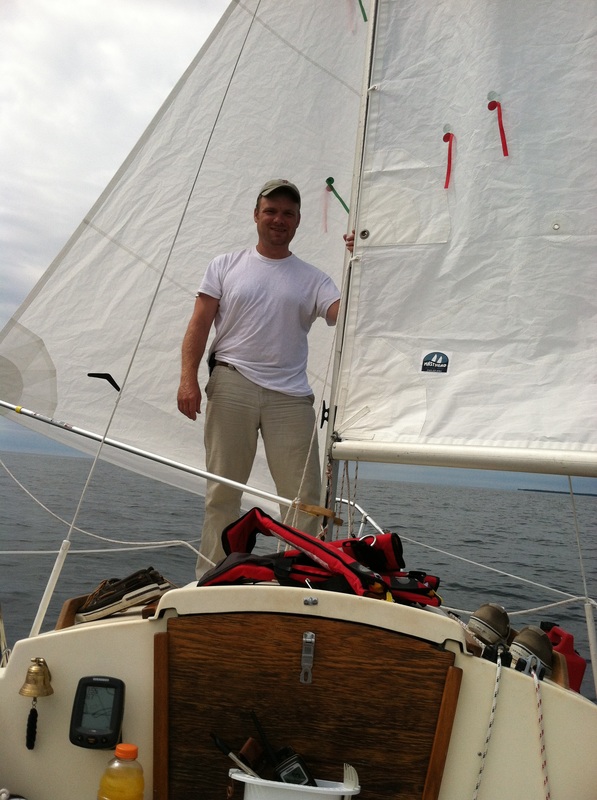 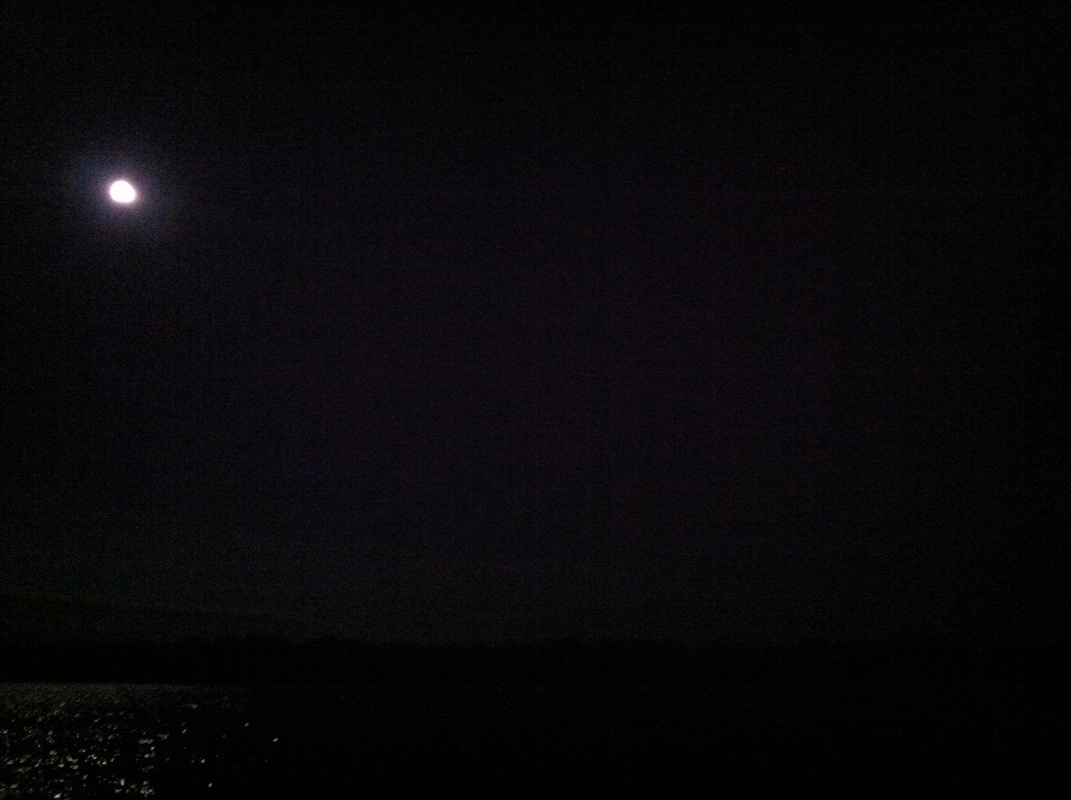 On the last day we sailed back to Ellison Bay.  We had decent wind, but highly variable.  We made a real nice quick broad reach across the channel/Portes Des Mortes passage, but the wind shifted and we needed to beat from Portes Des Mortes down to the entrance of Ellison Bay, at about that point the wind shifted again and we needed to keep beating into the harbor.  Very fine sailing conditions on the last day.

Overall it was a wonderful and challenging trip.  The boat performed great.  We had full stomachs , good nights sleep, and a good variation of sailing conditions.  The birds were also enjoyable to watch; we saw many White Pelicans, White Egrets, Blue Herons, a flock of Swans, and a Bald Eagle.  If you go, be well prepared regarding your boat and safety gear, and study the charts, as the conditions change quickly, there are some big boats about, some rocky shores, and shoals to be aware of.  I would recommend watching the forecast carefully and don't head out in bad weather.  This is a pretty area to sail and we will be back; perhaps we will sail up to St.Martin Island next time.  My brother and I had a great trip together and that was the best part. 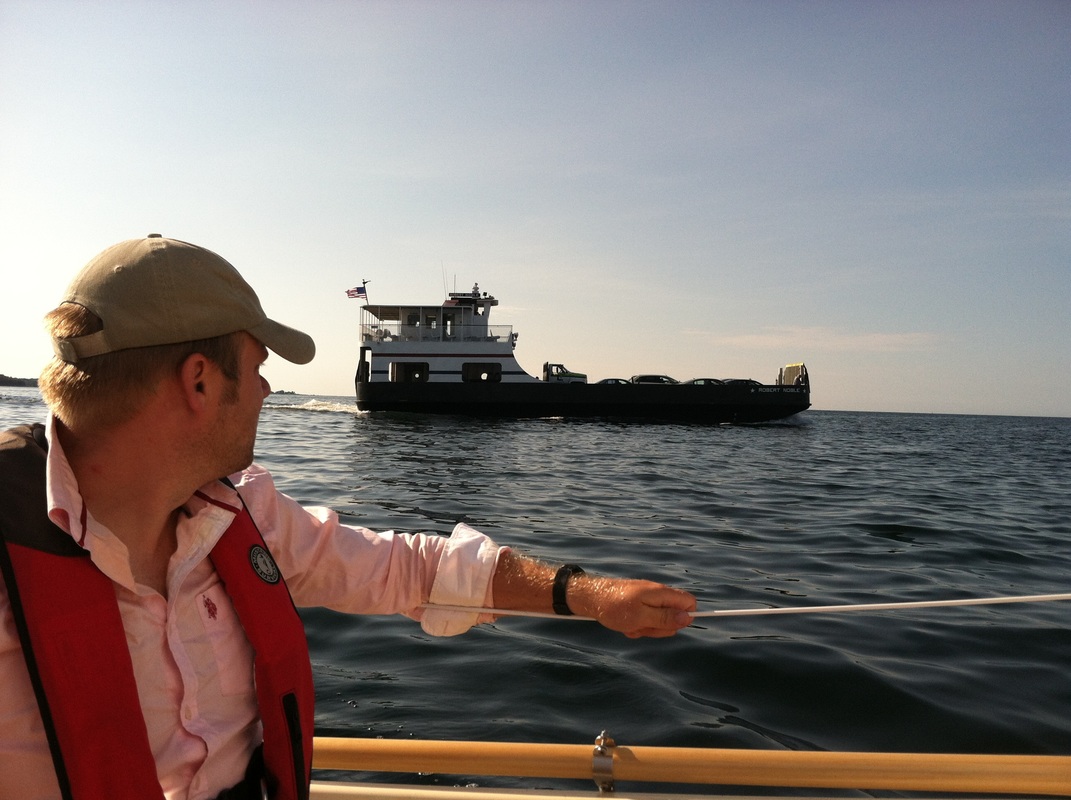