Building a Model of the Oseberg Viking Ship!!

I am excited to be embarking on the construction of a model of the Oseberg Viking Ship!   This ship was a ceremonial burial ship built around 800-834 AD and was excavated in Oseberg , Norway in 1904-1905.  My great grand parents came from Sweden and my wife has significant Norwegian heritage, so with our bit of connection to Scandinavia, I thought this would be a fun model to build.....I also love the lines on these fast-looking Viking boats.  I saw the actual Oseberg as a young teenager in the '80s in the museum in Norway, post cards (and entry ticket) from my scrapbook are posted below.  I'm going to take my time, and as always I am not the fastest builder due to work and family commitments, but here goes!
Wikipedia page on the Oseberg:  https://en.wikipedia.org/wiki/Oseberg_Ship

I will use the kit Oseberg 720 from Billing Boats in Denmark as the base kit for my model, though I will make many custom modifications. 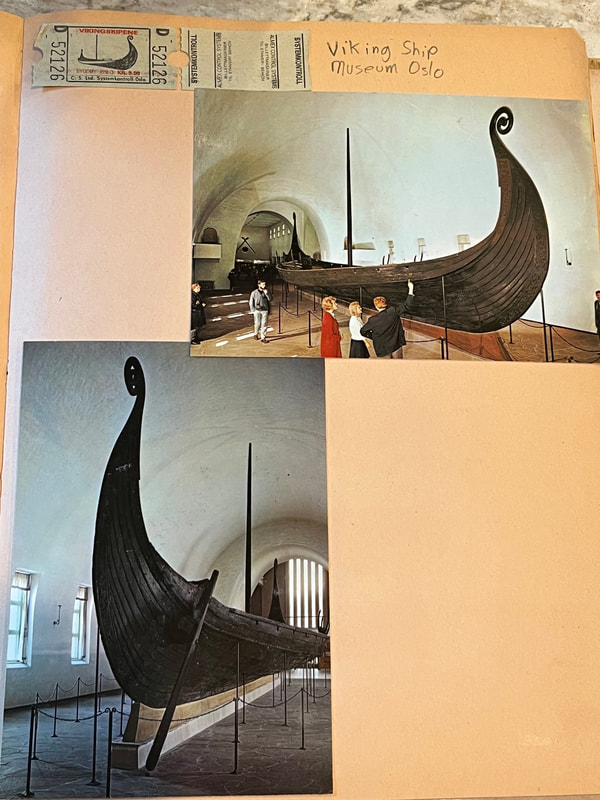 Postcards from the '80s showing the Oseberg in the museum in Norway. 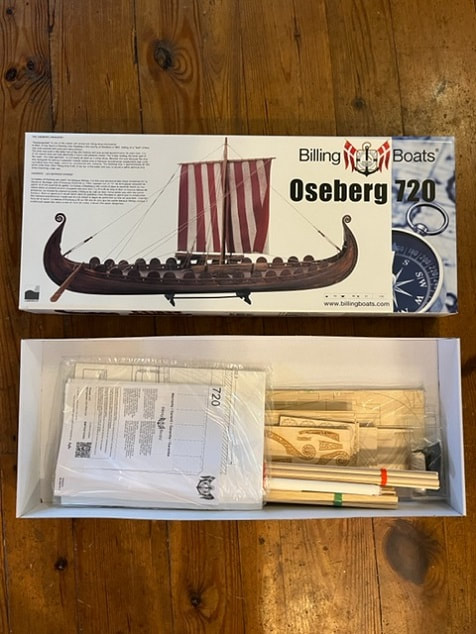 Here's the box opened with the kit contents. 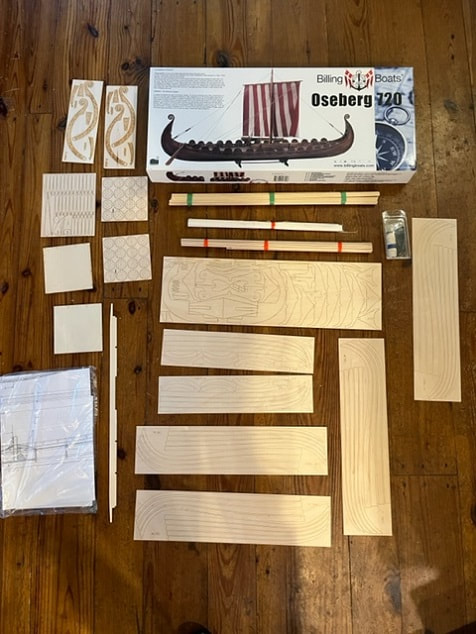 Tonight , I got started building the Oseberg Viking Ship Model.  I lightly wrote the part# on many of the pieces first using a pencil.  Then, I laid out the keel and glued up what I would call the keel-doublers, which are the reinforcing and thickness-adding pieces added to the both sides of the keel to build it up.  I am using CA for gluing wood together. 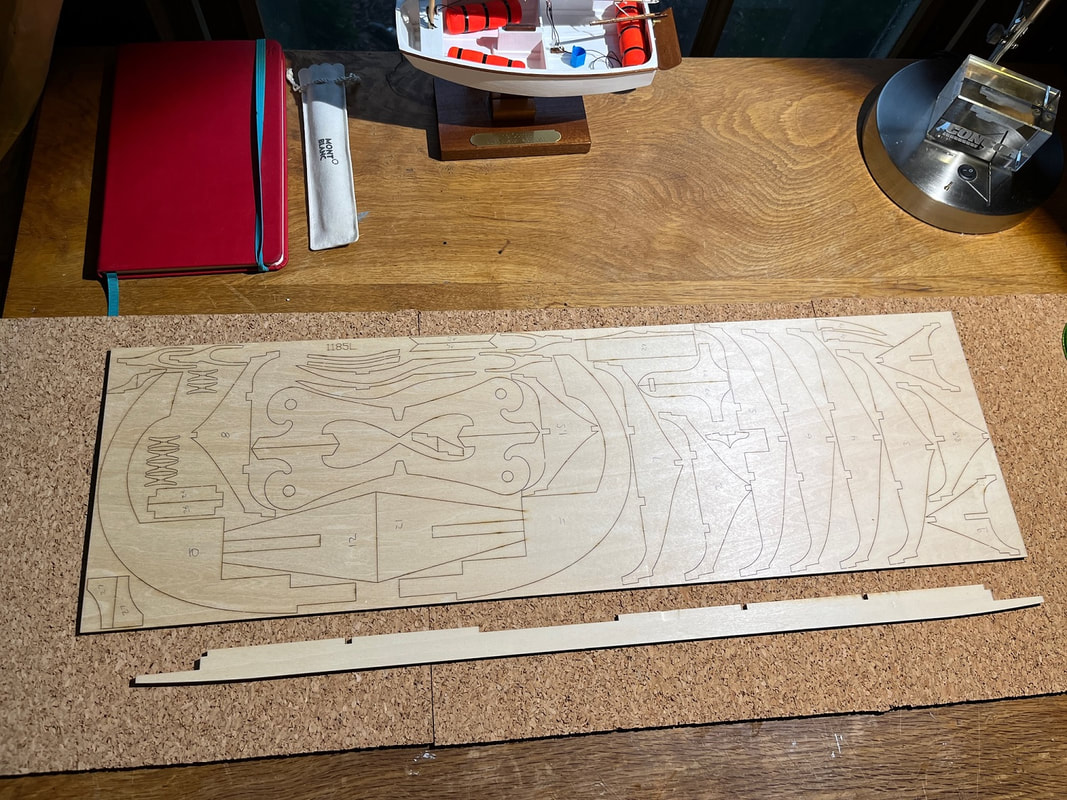 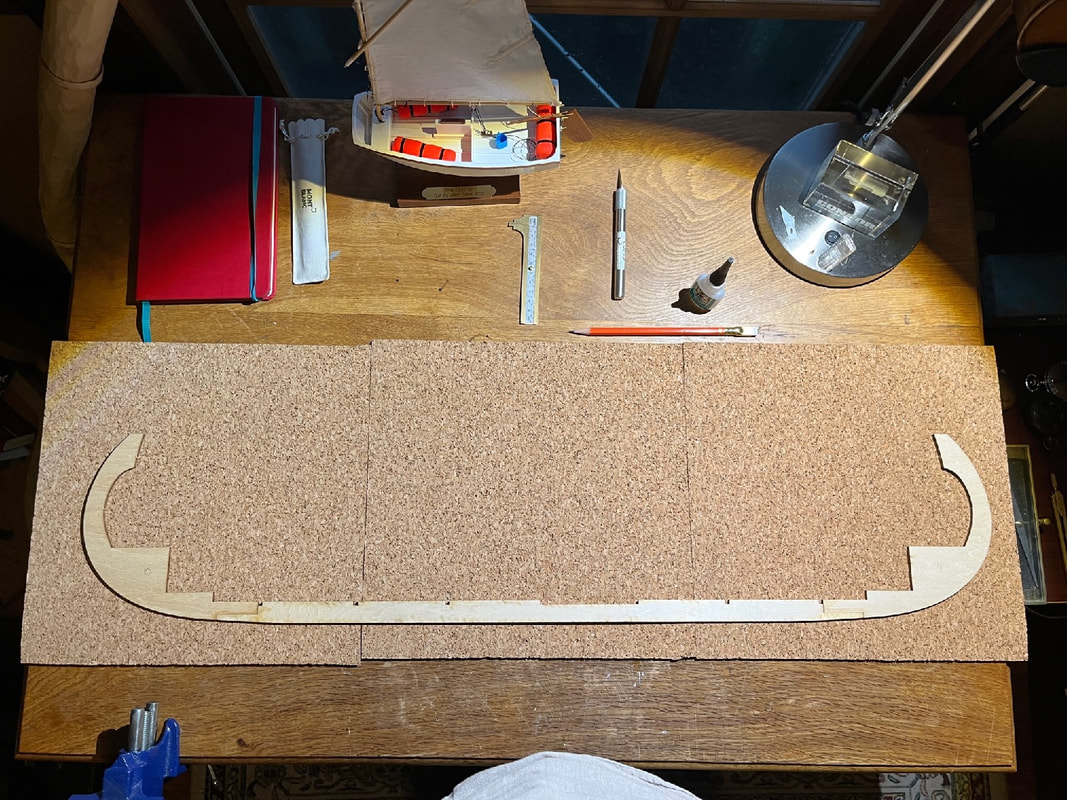 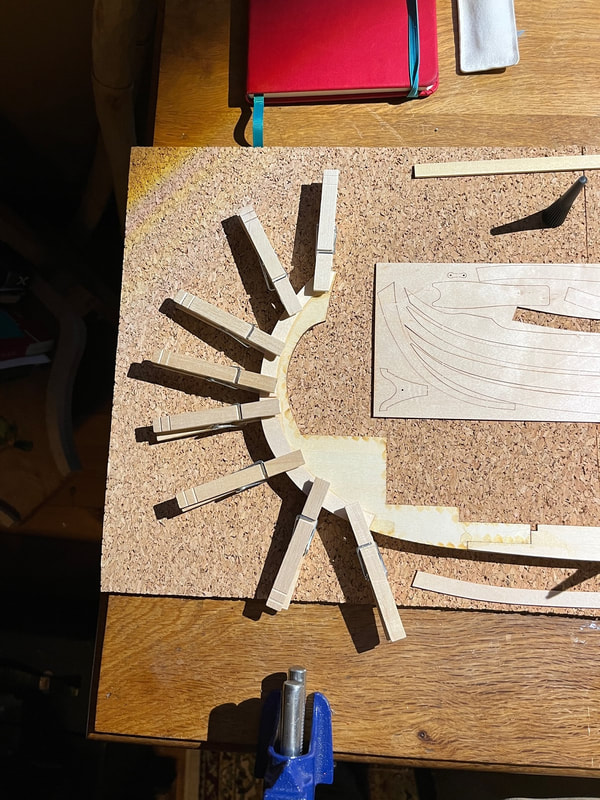 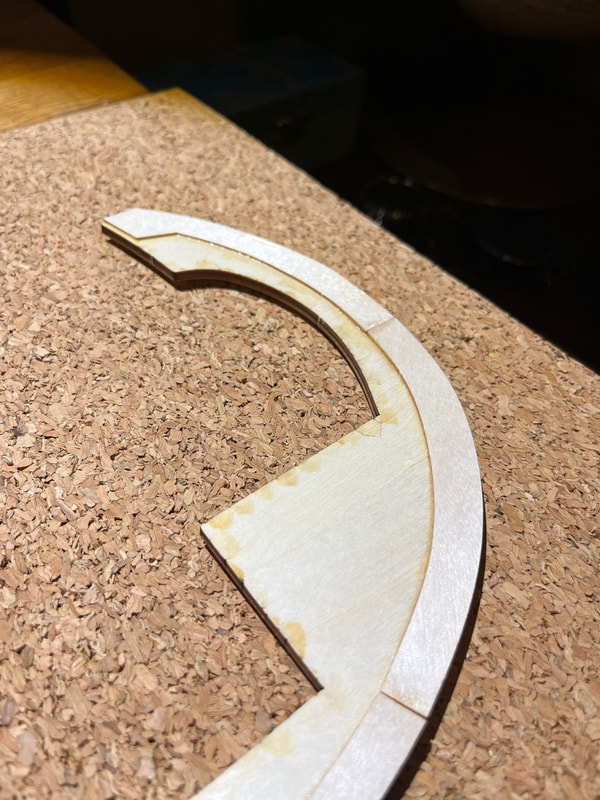 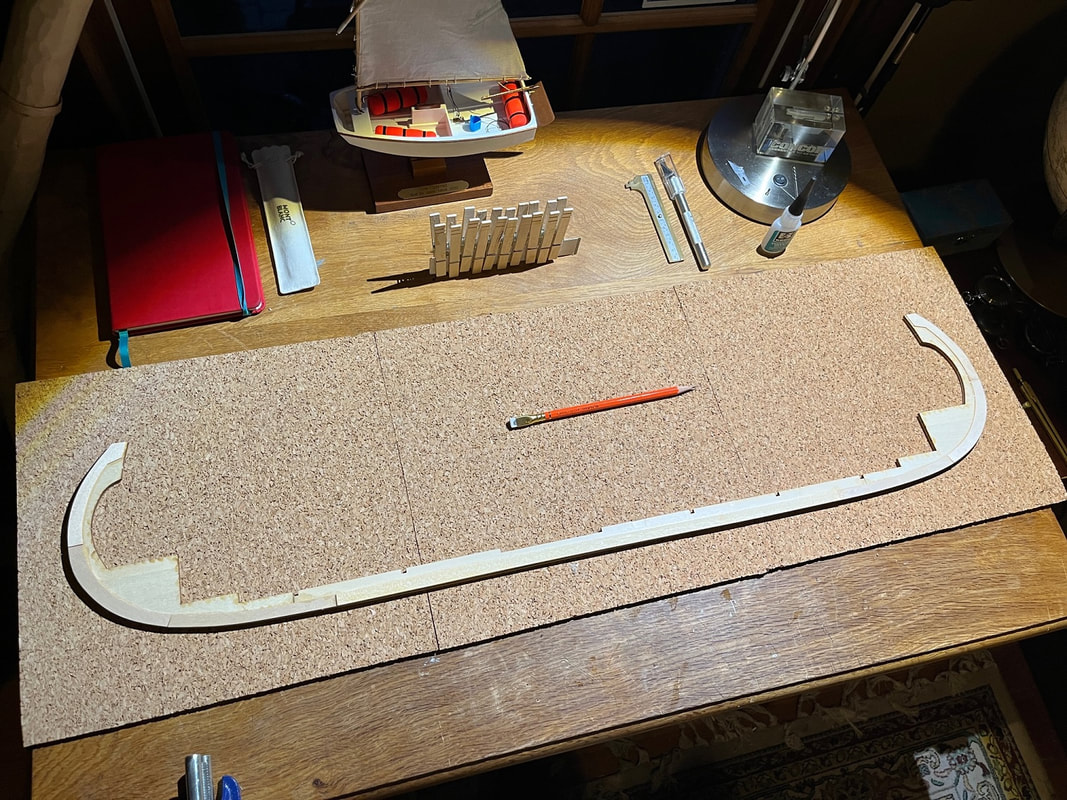 Permit me a small soap-box train of thought.   I seek to minimize exposed plywood edges in my model,  I also recognize my model will not be a perfect replica of the Oseberg, but I do seek to have reasonably accurately spaced bulkheads.  The model from Billing Boats (Denmark) includes various plywood and plastic parts.  I believe this is totally acceptable and I think that a modeler could build the stock boat from the kit and wind up with an absolutely beautiful and admirable model.  Hats off to any one who builds any boat model , and to anyone who builds the stock Billing Boats Oseberg 720!  Kit builders need to balance cost and time-to-build, and expectations of builders, and this would be a tough balance to strike.  I am very thankful for the work done by the Billing folks; what a great model.  The I will use the pre-cut planks which will be fantastic, and the nice decorative burned scrollwork in the kit, and of course the plans are so nice and essential and hard earned by the designers.  Buying the kit provides me with perfect laser cut wooden templates with which to make solid wood parts.  Thanks Billing Boats designers!!  This said, I will be recreating many plywood and plastic parts with solid wood, and I will be adding the visible parts of bulkheads that are missing from the kit plans.  I utilized the plywood keel for stability and I will use the plywood parts in below-decks spots.  Visible parts will mostly, but not always, be recreated with solid wood parts, as will be seen in the build log as I progress.  I am not a perfectionist so for example I may use the plywood shields from the kit, because I think they look cool, and also I do not yet know if I will place metal nails along all the hull planks as Von Kassa and Jack P did (their end results were truly amazing!).  OK, enough writing, I will get to the fun part....pictures.

I contemplated using the plywood bulkheads.  They are made from very high quality plywood and are well-cut.  I will not be staining my ship as dark as the ship looks in the museum in Norway, I will be shooting for a carmel colored lighter finish.  I tested a stain similar to what I will use on the end-grain of the plywood bulkhead to see how visible the plys would be, and unfortunately I thought the plys were to visible so I need another solution: 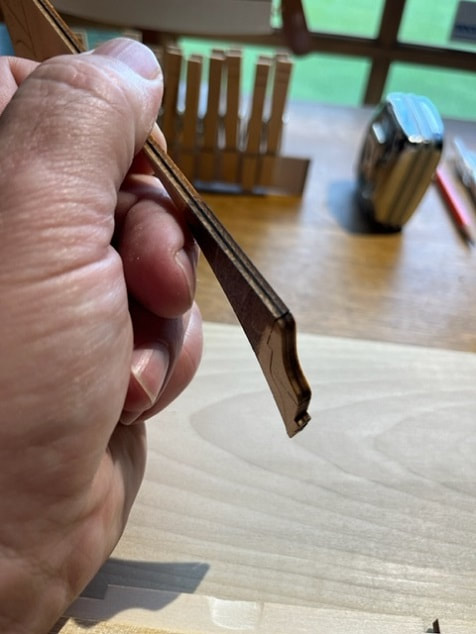 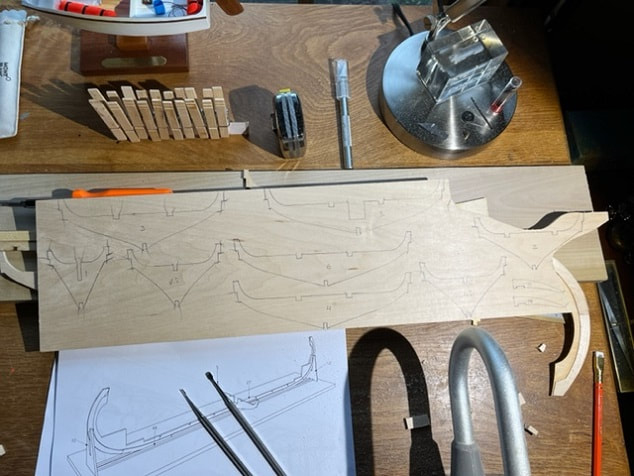 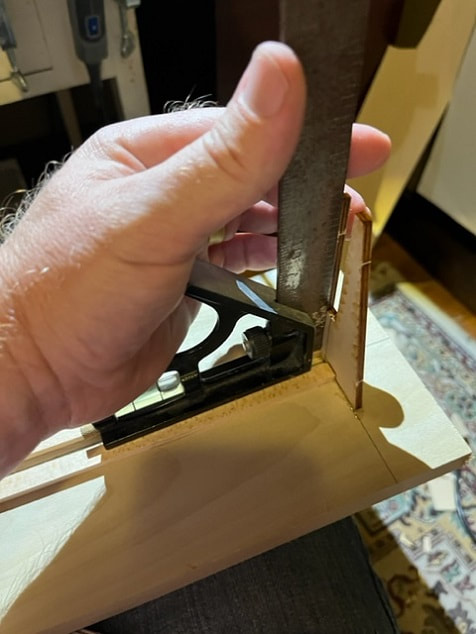 Squaring up the jig. 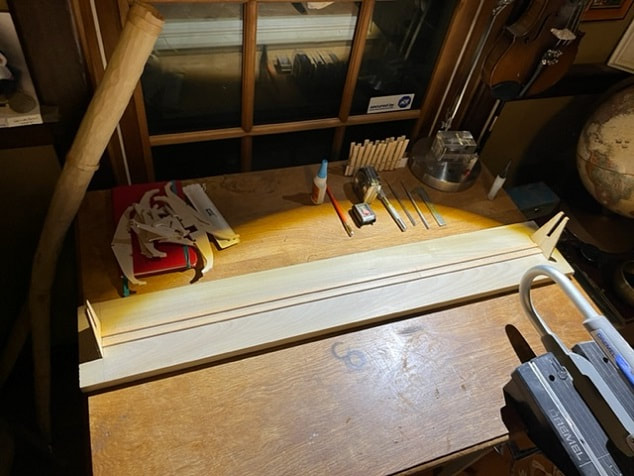 Base plate fixture for the Oseberg 1:25 scale 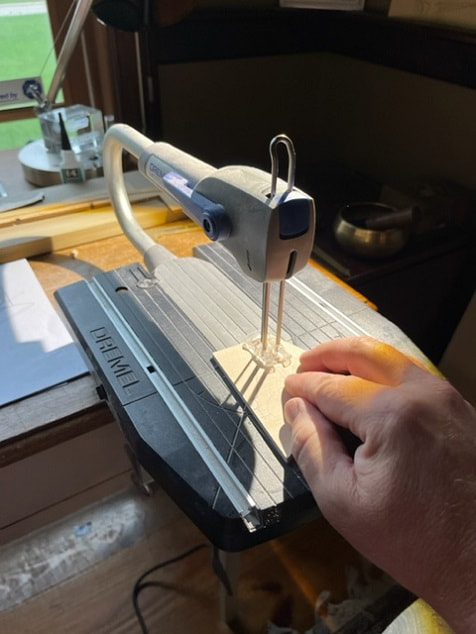 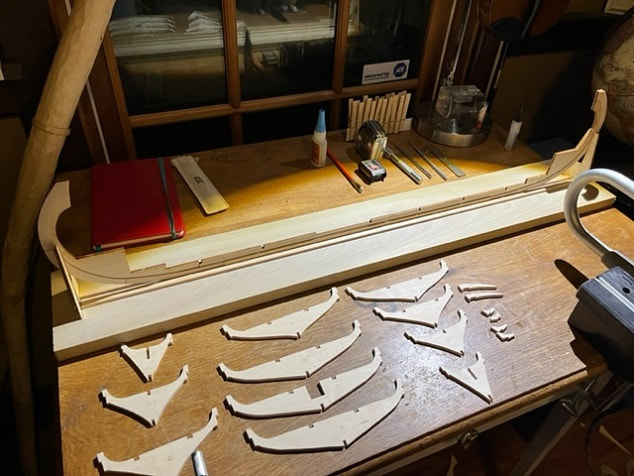 Solid basswood bulheads made using the templates from the Billing Boats Oseberg model. 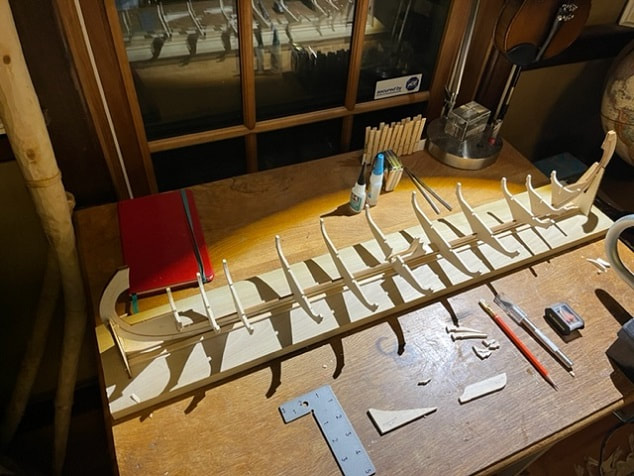 Oseberg Viking Ship model, these are my solid basswood bulkheads that I made by using the Billing Boat kit bulkheads as templates. In this photo these are just dry-fit in place, not yet glued. 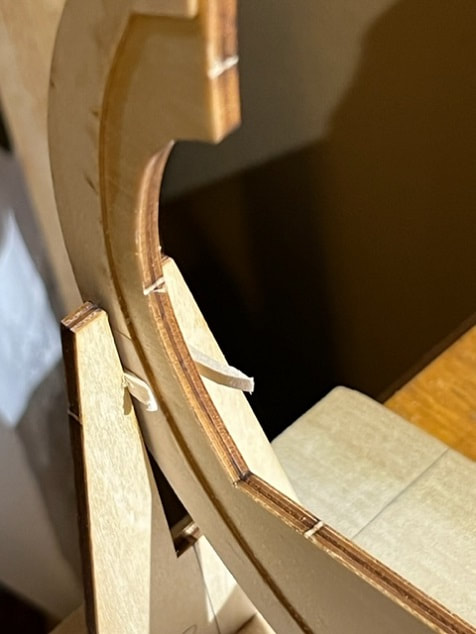 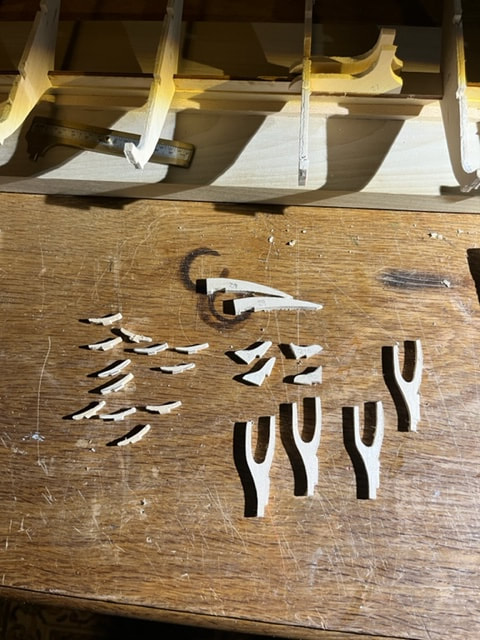 Here are the cleats and oar-cradles , cut out of basswood , using the plywood from the kit as a template. 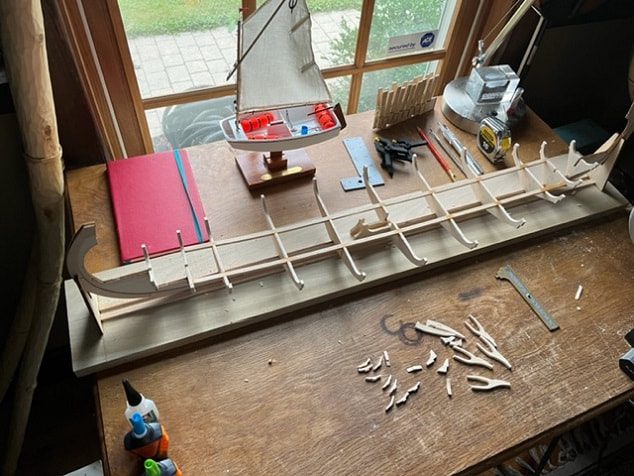 Bulkheads glued in place, with gel super glue. I used a small square to ensure they were true. Note the stringers also installed, which add to the proper alignment and rigidity of the framework. 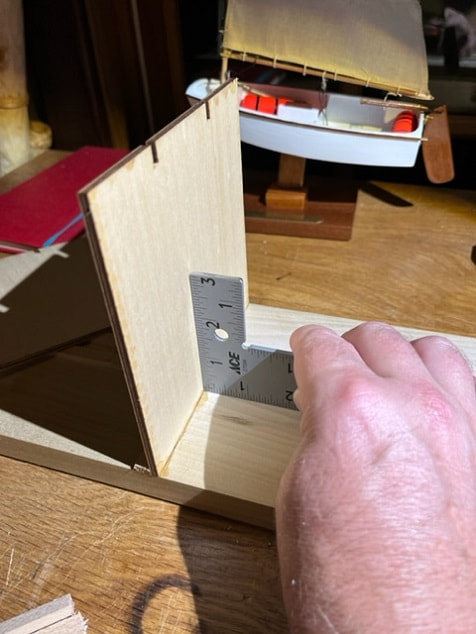 First, Billing Boats provides a nice structure that supports the hull in an inverted orientation for planking. Here I am building this support frame: 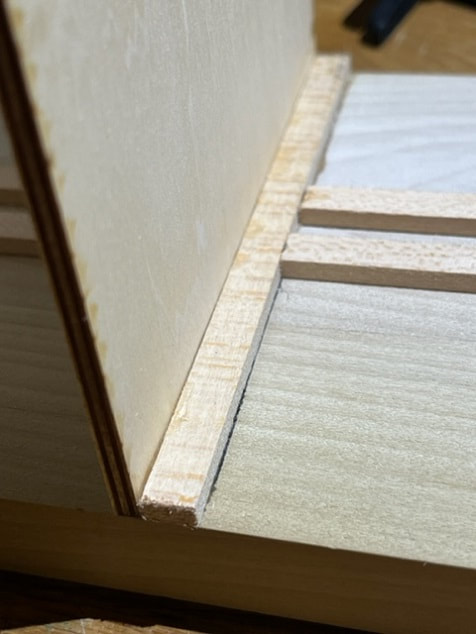 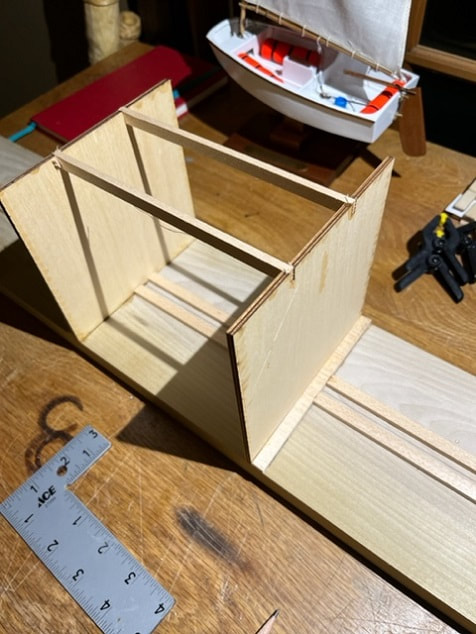 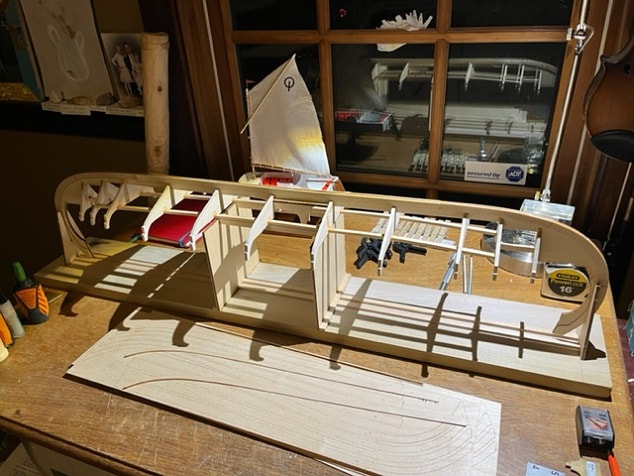 Here is the hull framework resting inverted on the support frame.
BEFORE PLANKING, I will now use  razor knife to chamfer the bulkheads to match the curve that the planks will follow across the bulkheads. 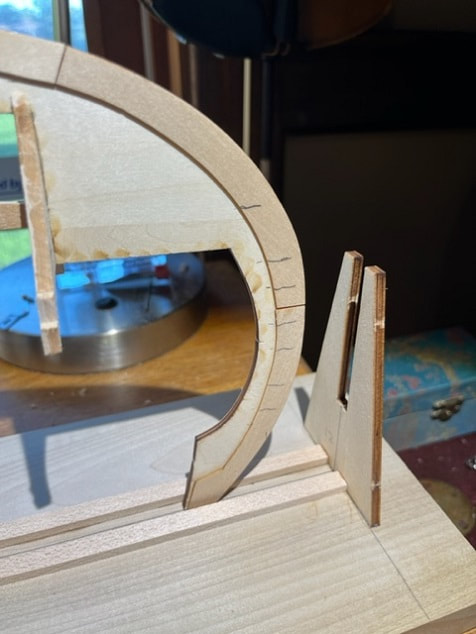 I measured the height from the bottom of the keel of the end of the plank locations on the drawing and then transferred that to the keel in pencil. 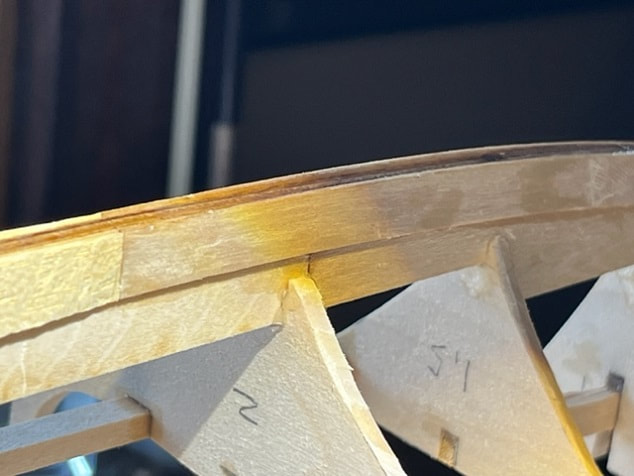 The thickness and width of the plank keel-doublers was thicker and wider than the curved plywood keel doublers, so I used a razor to feather them together in a nice transition before planking. 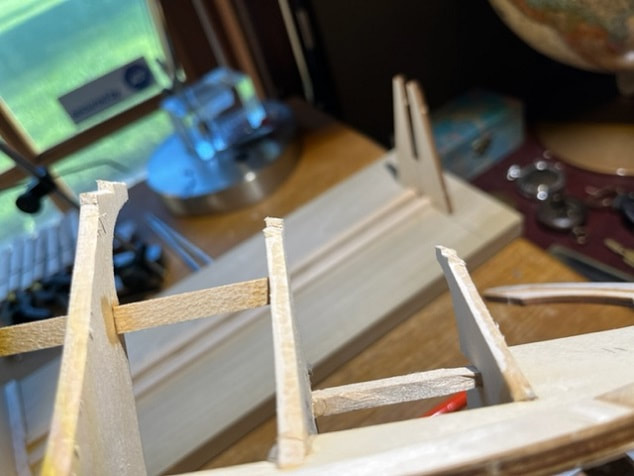 Here are my basswood bulkheads chamfered (with a razor knife) prior to planking. 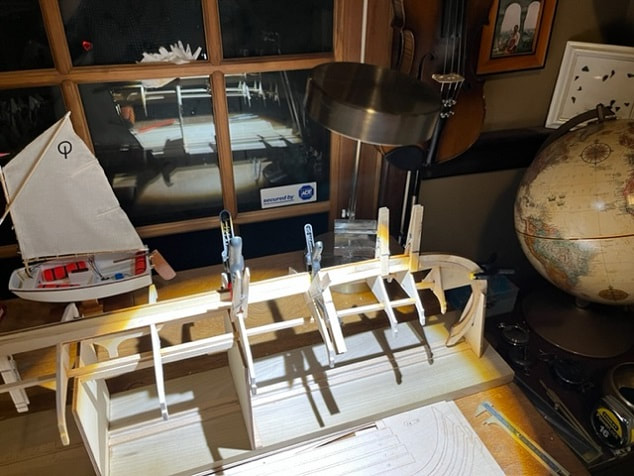 To avoid warping of the hull during planking, I will symmetrically plank each plank on one side then the other....rather than planking one whole side and then the next whole side. I am carefully using gel CA glue. I don't want any ooze-out, as I will be staining this hull. 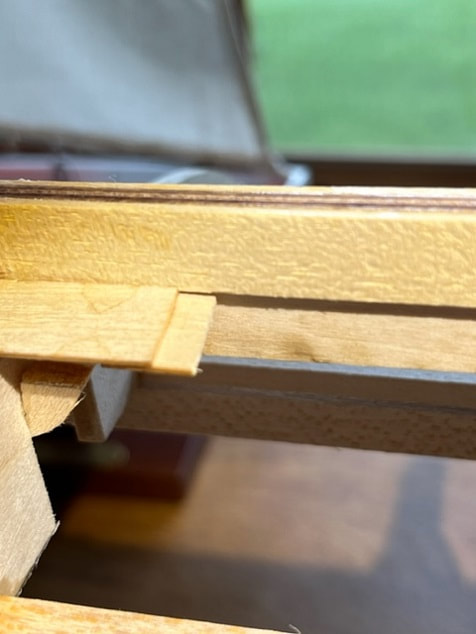 The butt-joint of the planks doesn't land on a bulkhead, so I am adding these little backer-boards behind each plank butt-joint. 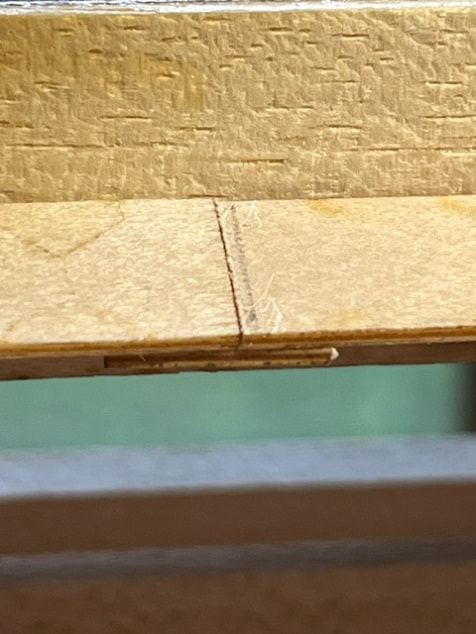