Mornings consisted of fresh french-press coffee, hard tack, and a warm meal.  The next day we sailed north east, clockwise, around Grand Island.  We found a great place, pictured below, to anchor and sleep on the west shore of the island. 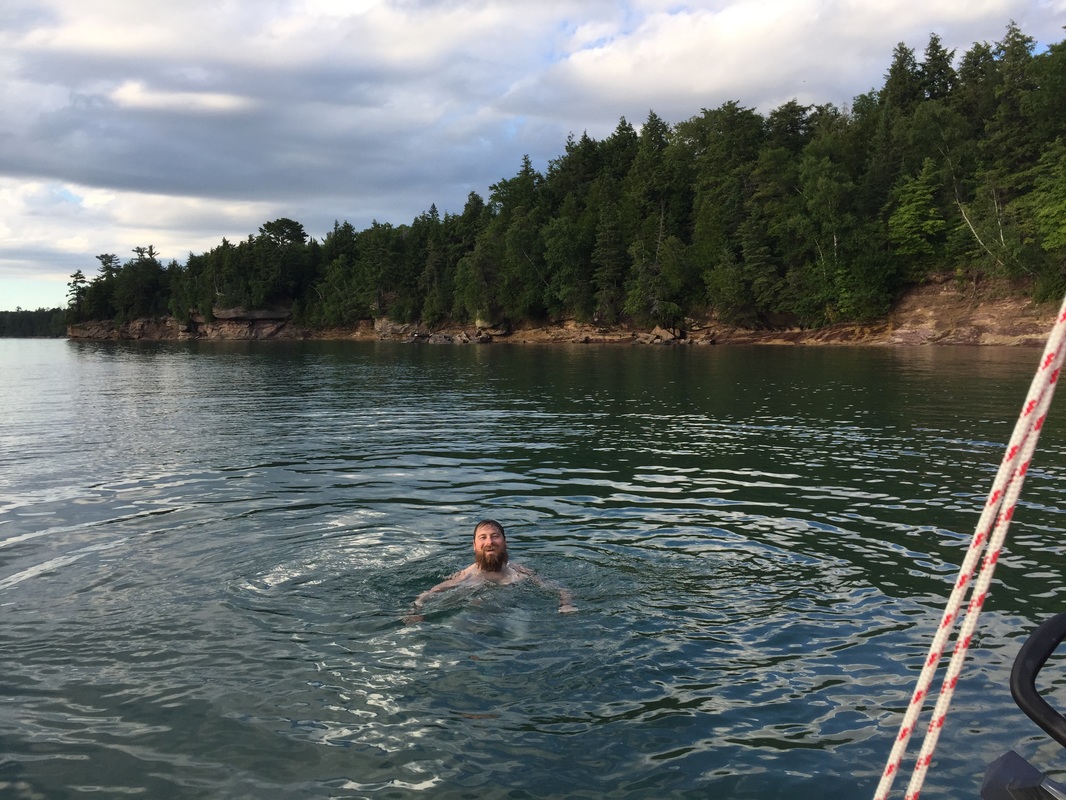 None of the food we brought needed to be refrigerated; we had coffee, hard tack, noodles, confit meats, salt cod, carrots, potatoes, rum, limes, oranges, and......spam.   We brought Tang which we mixed with the lake water to drink.  We cooked on a two burner propane stove which we set up in the cockpit. 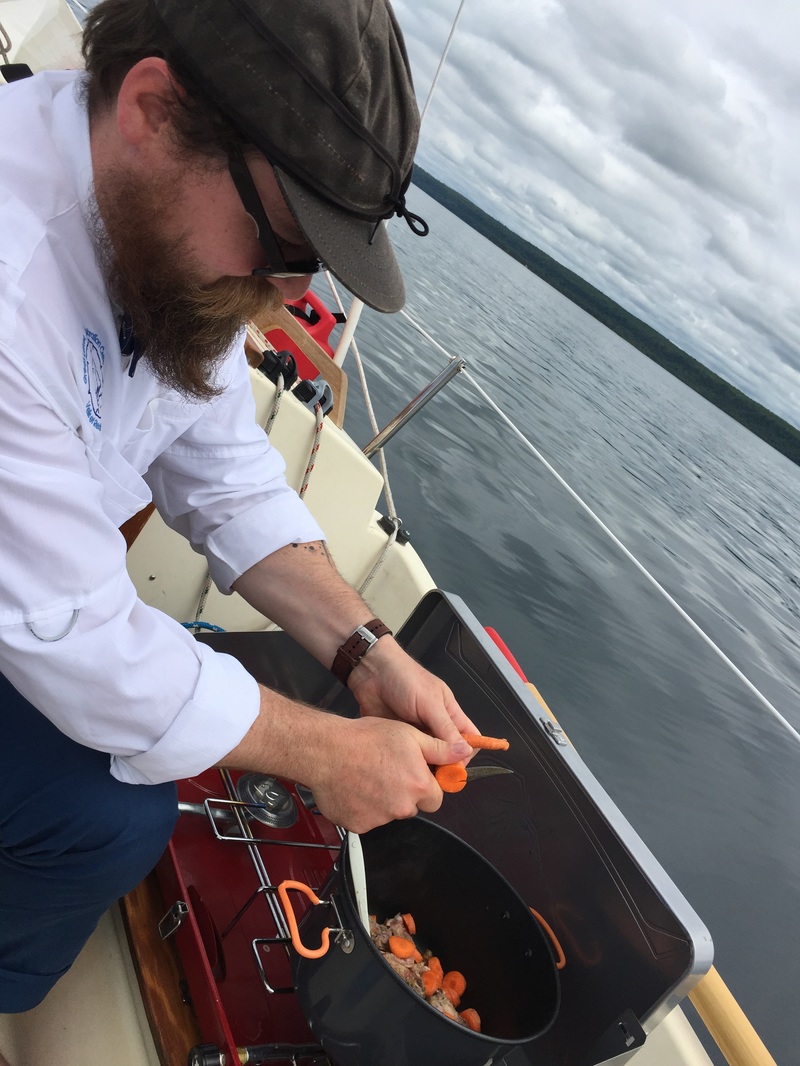 We sailed north and continued clockwise around Grand Island.  Pictures below are of the rock cliffs at the north end of the island, and of our little ship running before the wind using the whisker pole on the 110 jib.  You can see in the photo's how many boats we came across; very very few.   There are tour boats that run out of Munising, and which take visitors up to Spray falls and back to town. 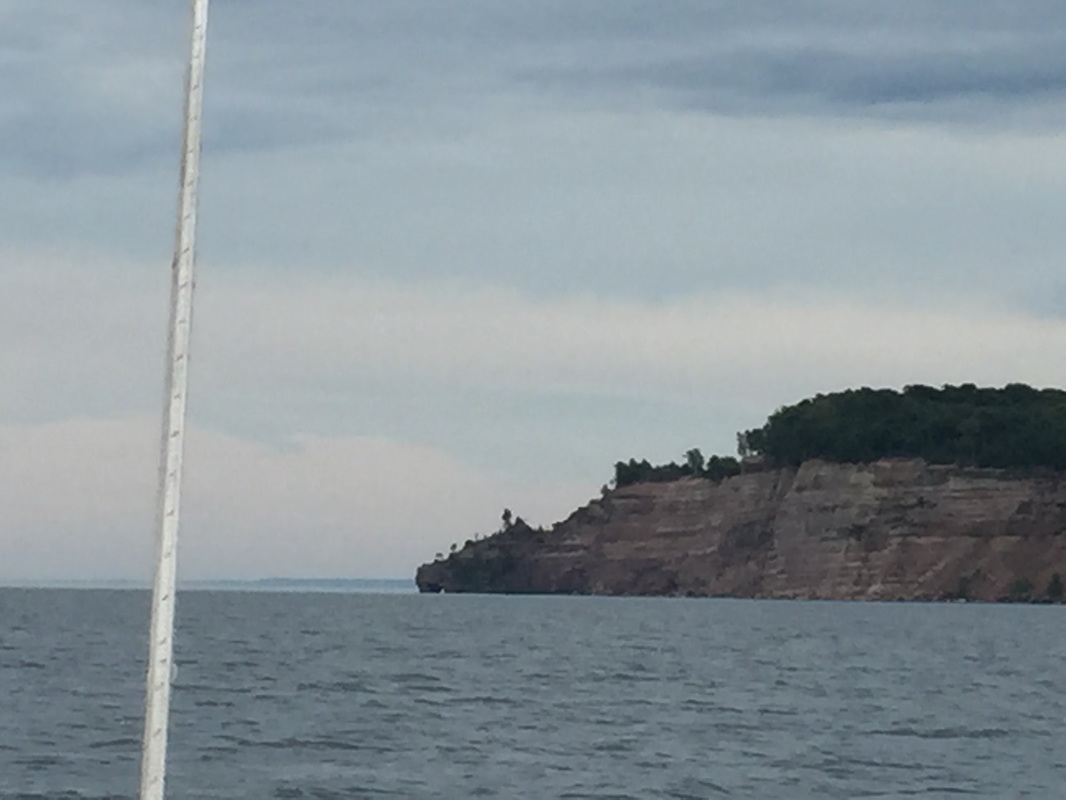 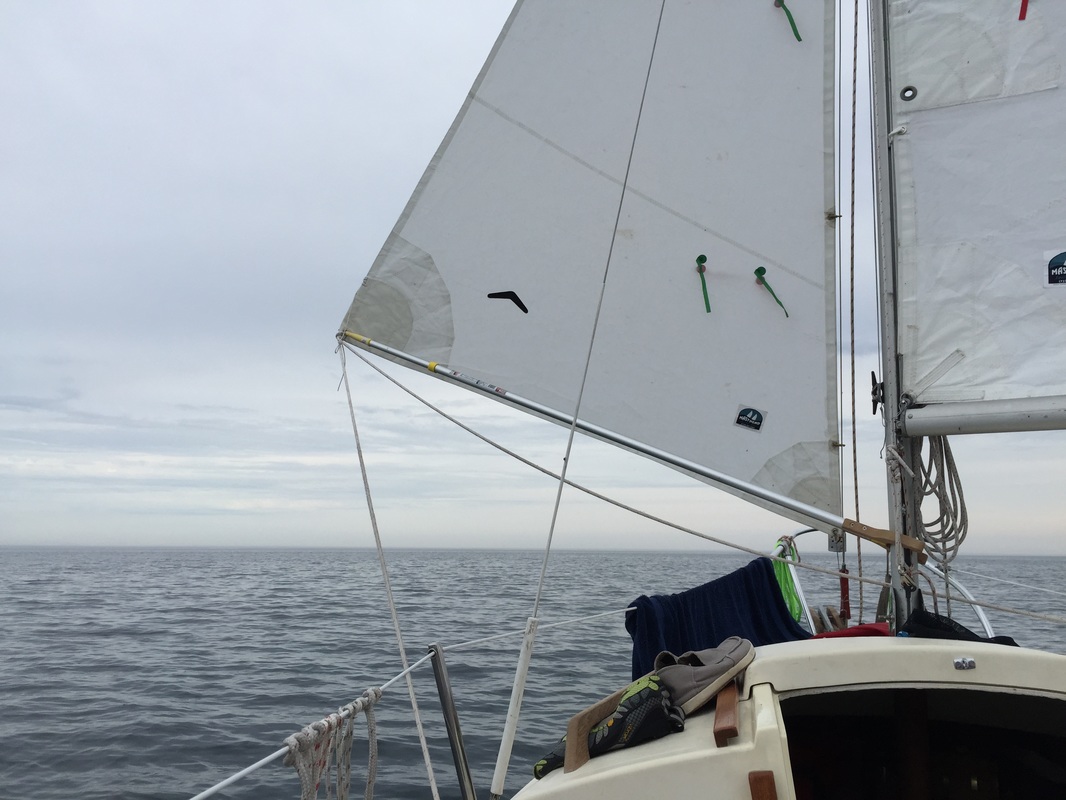 The Pictured Rocks National Lakeshore is a 42 mile long stretch of coastline on the southern shore of Lake Superior.  Sandstone cliffs rise 200feet above the lake, and rivers fall into the lake as waterfalls over the cliffs.  There are sand-dunes, and rock formations such as columns and arches.  Minerals staining the cliffs over the years led to the name "pictured rocks".  It is a long foreboding shoreline with no good shelters, so if the wind comes all the way across Lake Superior from any northerly direction, you will be blown towards the rocky shore.   There is a twelve mile stretch of beach, that would be better to be blown up on than it would be to be blown into a sea-cliff.  We had beautiful weather and were able to anchor and swim up to the waterfalls.  Wee bit of a shock jumping into the cold water but it's refreshing. 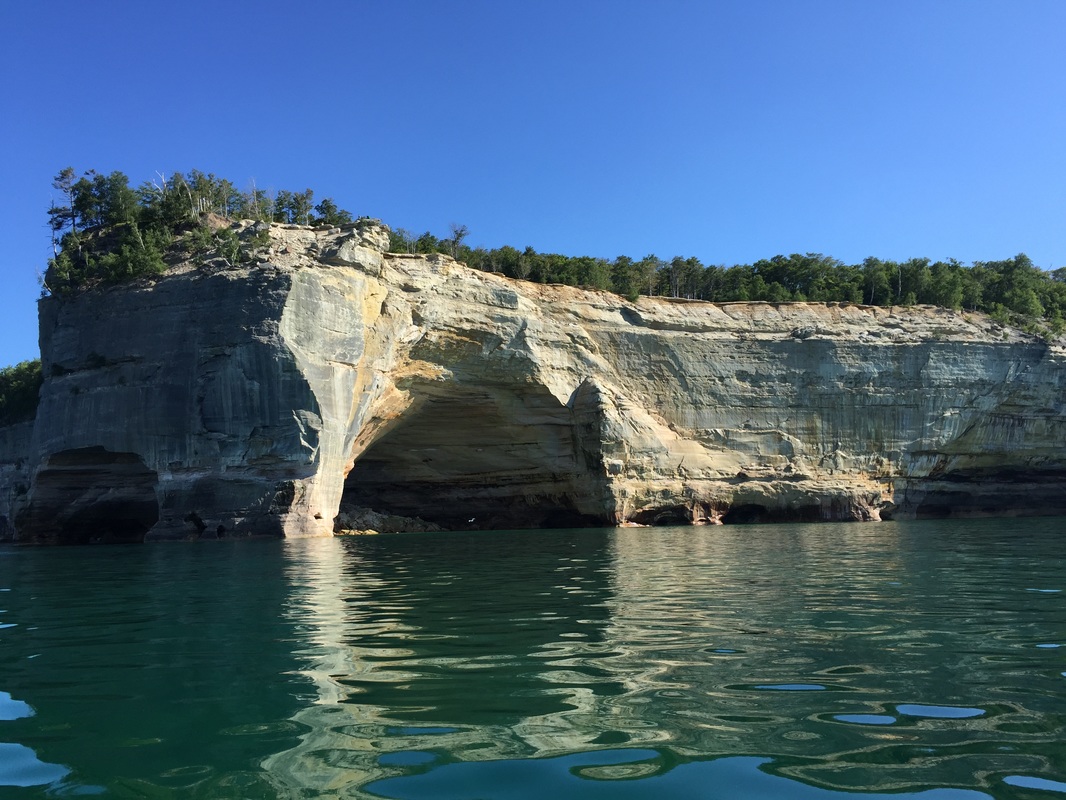 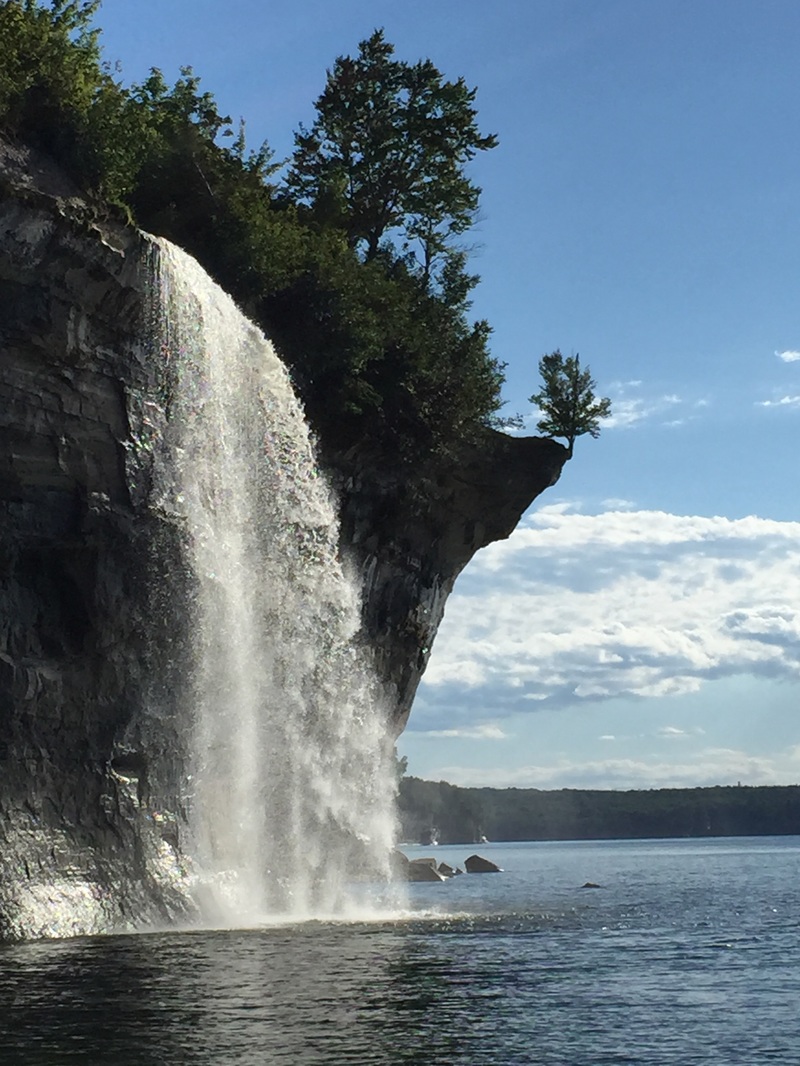 Sailing the Compac 16 on Lake Superior:  You'll notice the sweater in the middle of summer; it is nice and crisp out on the lake, I don't like the heat, so I love the crisp summer evenings on the lake. 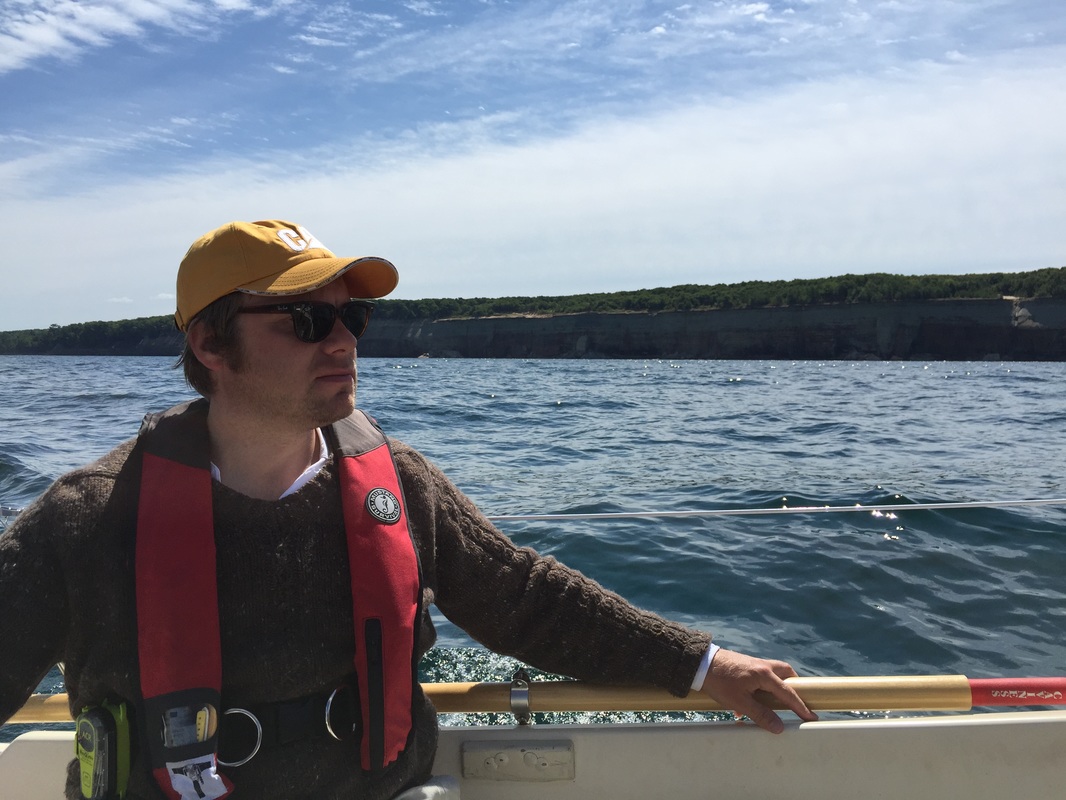 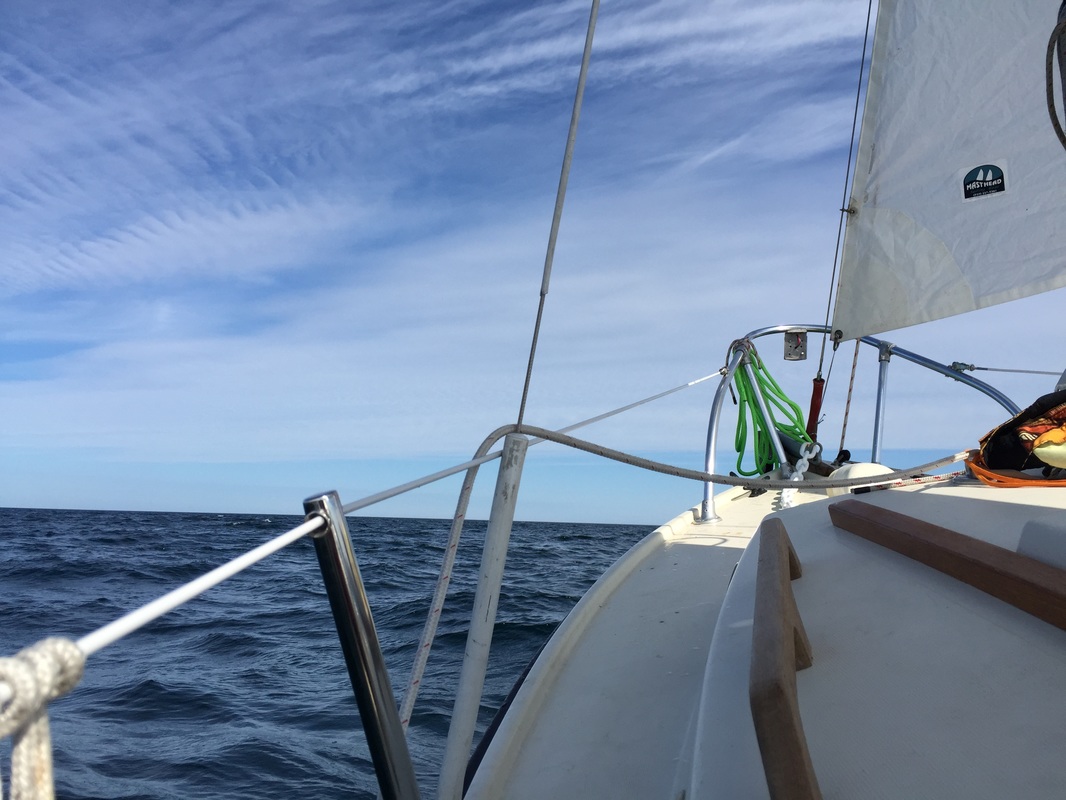 The night sky was truly amazing and though we eschewed communication with civilization during our voyage, we did use a fascinating app on my brothers phone that could identify all constellations in the sky just by pointing the lens of the phone around the stars.  We had a great time with that.

Idyllic. Pristine. Wilderness.  Crystal waters.  Beautiful sunrises and sunsets................twas then that they came for us.  One by one, they rose up from the still waters surrounding us, till there were millions of them dragging, biting.  Us two, and the ship too, were besieged and hopelessly outnumbered.   They were the biting flies, we gave them the name "The Flies of Sauroman" for surely they could only have been conjured from some dark magik.  Our bright ship turned to black as they covered it, and the sails too.   And thus, we beat a hasty retreat, because seriously if you are ever on Lake Superior in a biting fly hatch (different than the non-biting-fly hatches that also occur), I would recommend getting the heck out of there.  I won't get into the comic detail of our efforts to avoid and overcome them, but they won the day, and luckily it was near the end of the trip so we headed home on the fourth day after having another great and memorable trip.

I would recommend visiting this lake and this place, though next time I will go in late August or early September to try to avoid the biting flies.  I look forward to going back.

Sunset as we sailed towards our anchorage on the pictured rocks lakeshore. 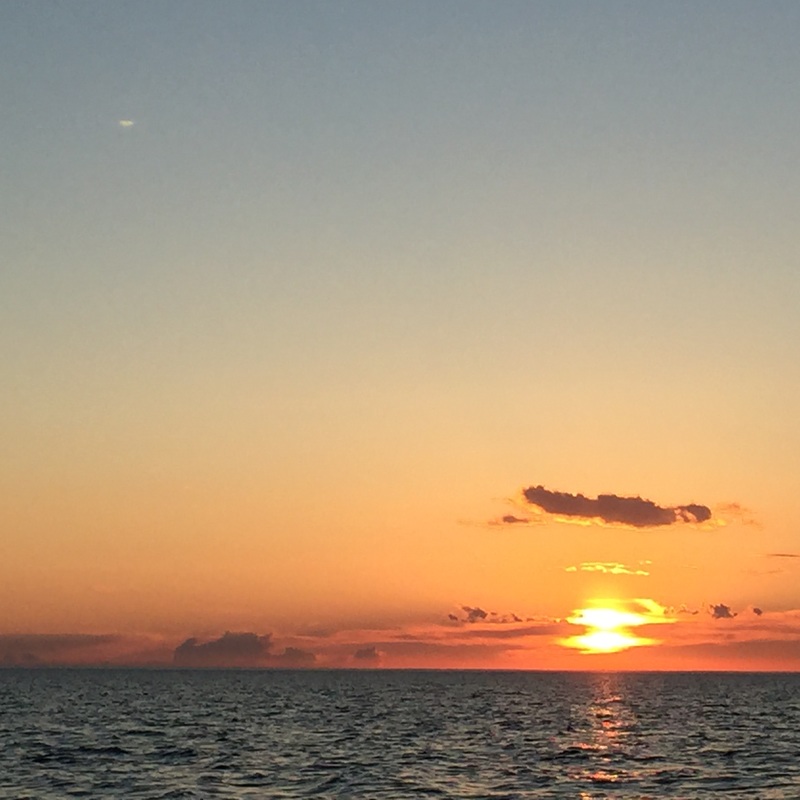