The sea was angry, and whipped the rode, and though tormented, the stubborn anchor held till morning.....

photo above: Sunrise, Washington Harbor, Washington Island, Wisconsin, Lake Michigan, after a bouncy night at anchor aboard the Compac 16 Lillyanna.

And here, the Anchors and Rodes of the SCAMP "Argo":

Link to SCAMP "Argo" Build Log Home Page
There are times when you throw the hook (fishy word for an anchor) overboard to cast a line for thirty minutes on a calm inland lake.   There are also times when your own decisions and turns of events outside your control land you in unfavorable anchorages where high winds lash your boat, and your anchor is keeping you precariously off a lee shore.  I myself do not put much stock in anchor recommendations based on boat length.  I cannot quite believe that the small anchors that are recommended for big boats would actually hold that boat in a strong wind.  The anchors for the Argo are oversized as far as manufacturers recommendations go, and I am A-OK with that.  There are myriad aspects to anchoring, from bottom structure, to wave amplitude and frequency and length, to scope of the rode, to type of anchor , to weight of anchor, to windage of boat, and so on.  Different anchors are required for having lunch or fishing, versus requiring your anchor to hold you in a bit of a blow.  The SCAMP being a dinghy, my anchor choices are overkill for many situations, but I am very happy with my choices in light of the multi-day trips I do on the upper Great Lakes.  For inland lake day-sailing, a smaller anchor would suffice.

11lb Stainless Lewmar Claw Anchor, Detail showing moused stainless steel anchor shackle
"Mousing" a shackle, means to bind the pin to the shackle to prevent the pin from working out of the shackle.  I have seen wire and also nylon zip-ties used for this.  I used the stainless wire shown in photos here. 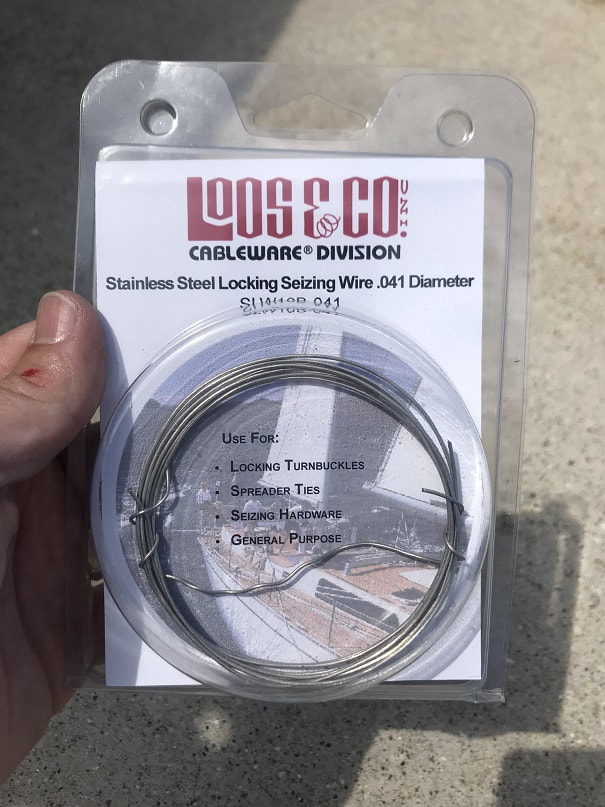 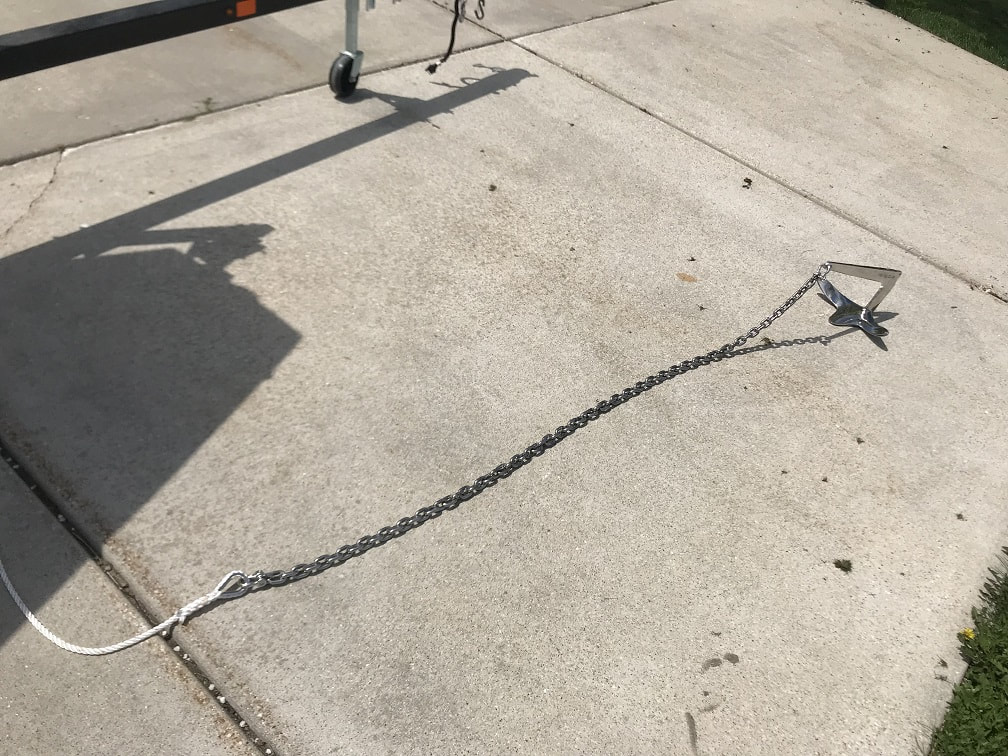 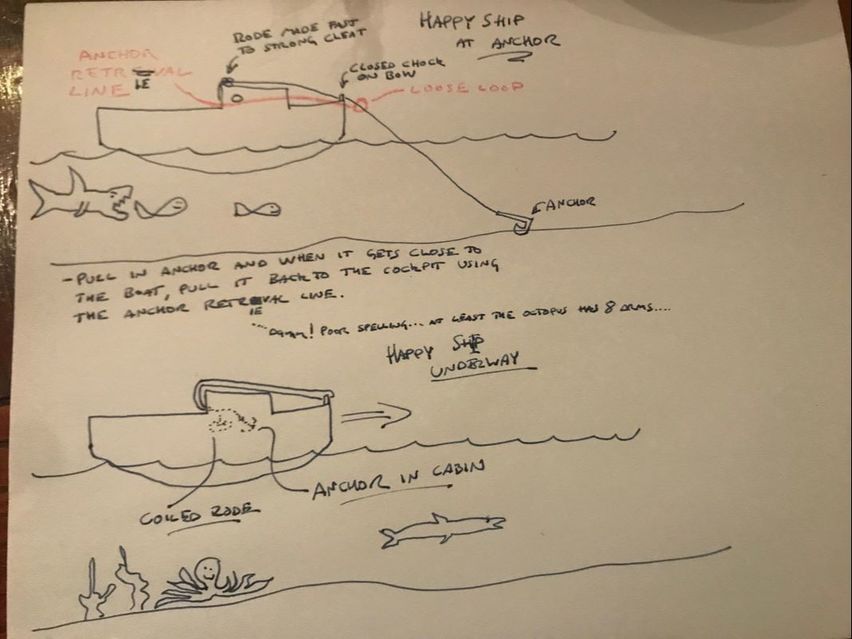 Extremely detailed engineering, to-scale drawing of the anchor system. This type of anchor setting and retrieval system is logical for small boats with foredeck configurations such as the SCAMP, which make accessing the bow a challenge.
...and now for some potentially boring text that may be read diligently by rare folks that are interested.... 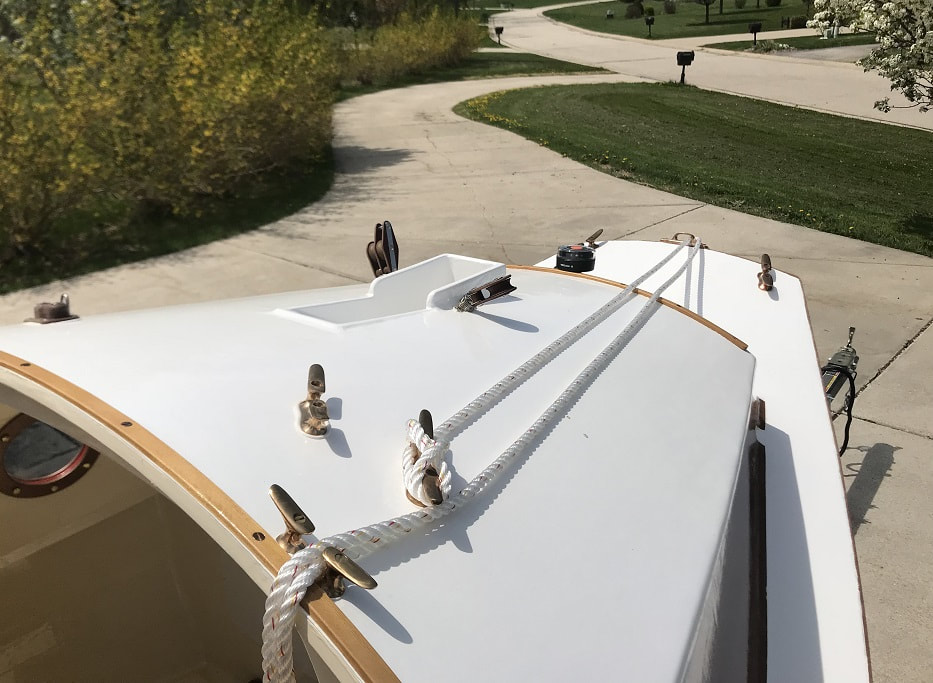 Top view of anchor system with the anchor in the boat. 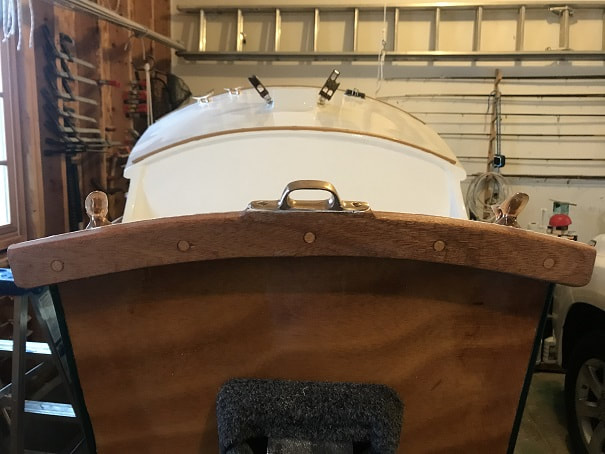 View of closed bow chock, on a platform which is angled up to point at the anchor rode cleat on the roof top. 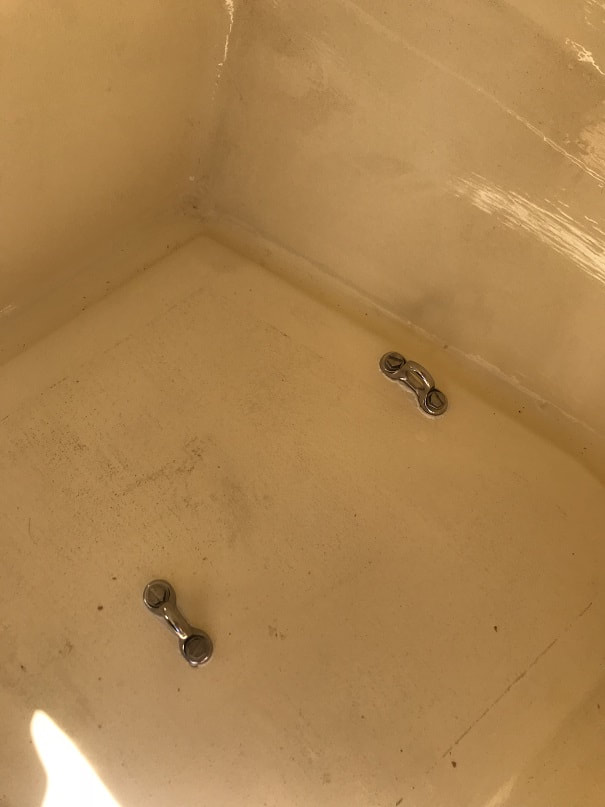 Pad eyes, mounted to the veranda floor, will be used to secure the anchor and rode so that in a capsize they do not dangerously fly around the boat. 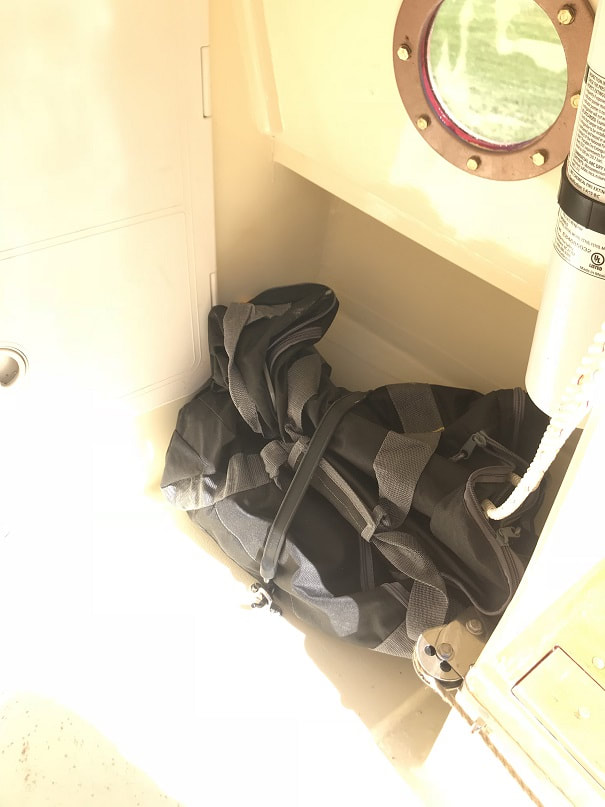 Anchor, chain rode, rope rode, all in a canvas duffel and secured to the floor with a bungee that can be quickly loosened to access the anchor.

The slack hemp line on the left is the yard halyard, the middle hemp line is the short anchor-line retrieval line, and the white line to starboard is the anchor rode.